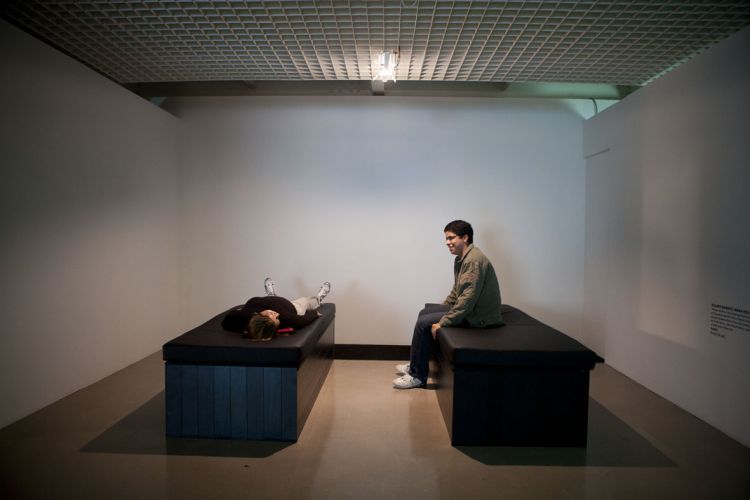 Abstract:
“feelMe” is a work that for the first time remotely transmits the tactile sensation. Our work provokes the exploration of the sense of touch while promoting the interaction between two people mediated by a machine. The work is constituted of two surfaces, or “beds”: the first one (tactile transmission unit), in which one of the participants, layed down, imprints marks to its surface by pressing it with the weight and movement of the different parts of his/her body; these impressions will be captured and transmitted to the other participant, who lies in the second “bed” (tactile reception unit) and receives them simultaneously in the same positions and in proportional intensities, however, in negative, that is, when the surface in the first bed sinks, it rises in the second one, promoting a touch. The first body touches the second one, and the “beds” may be a few meters or thousands of kilometers apart from each other. Between the bodies, dozens of occult sensors, microcontrollers, engines (lineal actors), computers and a program that orchestrates that tactile communication. We allow the participant to experiment the possibilities of encounter between bodies through the digital world, with a different approach from the one provided by virtual reality. We want to explore the tactile perception separately in its “corporal way”, and only in future works to propose the expansion/extension of multimedia perception with the inclusion of tactile perception. Since our reception for visual and audible stimuli is much more trained for the aesthetic fruition, we decided to isolate and highlight the touch, so that finally we can rediscover it in the context of art, of media-art. We understand, however, that multimedia communication will include in the future all senses simultaneously, including smell and taste. The sense of touch is the most primitive in the phylogenetic scale. In the human body, it is present all over its external surface, besides some internal structures, and involved in several vital physiologic functions. In its relationship with emotions, studies demonstrate that the touch results in the decrease of hormones linked to stress, such as cortisol, and the elevation of the levels of hormones that promote social connections and the feeling of well-being, such as occitocin. Touch is known for its ability to communicate several emotions, such as love, gratitude, compassion and safety. The extreme reaction to the indictments for sexual abuse of children, in European countries and in the United States, results in a society whose people touch each other less and less. This happens in all age groups, not only in public environments, but also among family members, resulting in a progressive loss of its psychological and physiological benefits. Even the light tap on the shoulder was abolished. Added to the slogan “Touching is taboo”, there is a progressive substitution of the presential communication and the physical encounter among people for communication in digital spaces. It is fundamental to discuss what will be the development of this issue in a society that evolves avoiding physical contact, and that communicates more and more in the cyberspace. “feelMe” is a platform of remote tactile communication in which any kind of experience is valid: the corporal feeling of well-being from a deep touch, the interpersonal connection, the remembrance of past events, the feeling of uncontrolledness, the strangeness of the other’s caress through the machine, the incomprehension of those touches, the enigma of what the other one intends, everything is of interest. [Maria Hsu]

Biography:
The work involves artists Ricardo Barreto and Maria Hsu, jointly with the group Amudi de Arte e Tecnologia, which is constituted by students of the University of São Paulo Polytechnic School of Engineering. * Ricardo Barreto is both an artist and a philosopher. Active in the cultural scene, he work with performances, installations and videos. He has been working with digitalization since the nineties. He has also taken part in several national and international exhibitions such as: XXV Biennial of São Paulo in 2002; Institute of Contemporary Arts (ICA) London – Web 3D Art 2002. He also conceived and organized together with Paula Perissinotto the international FILE – Electronic Language International Festival. * Maria Hsu has dedicated herself to visual arts using several mediums: painting, photo and digital art, starting from 2000, having before that practiced as a medical doctor. After participating in collective exhibitions in São Paulo in 2003 and 2004, she presented internet artworks in FILE São Paulo 2004, and digital art installation in FILE RIO 2005 and FILE São Paulo 2006. In 2007, Hsu participated in the Triennial of Art of Luanda (Angola), the Exhibition at SESC Esquina in Curitiba, FILE Rio 2007 and FILE Porto Alegre 2008, in a co-authorship with Ricardo Barreto. * AMUDI – Nucleus of Art and Technology of the Polytechnic School of Engineering at USP: Breno Flesch Franco, Daniel Augusto Azevedo Moori, Erica Usui, Guilherme Wang de Farias Barros, João Flesch Fortes, Leandro Molon, Nadia Sumie Nobre Ota. The AMUDI Nucleus appeared in the Polytechnic School of Engineering at USP as a multidisciplinary project, with the objective of accomplishing research and developing projects that conjugate multimedia art, technology and interaction. Today, AMUDI also develops cultural projects involving urban interventions, and it counts with the participation of several schools and independent artists.