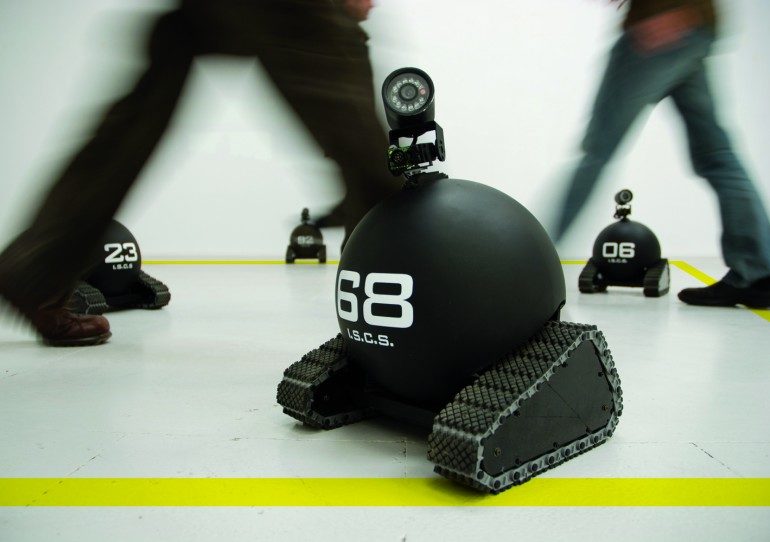 SURVEILLANCE CAMERAS: THEY ARE ALIVE!

Abstract:
Due to the increasing proliferation of surveillance cameras, we are caught up in an everyday and worldwide paranoia of insecurity, what we call “a surveillance society”. This project wishes to create a series of “living” robotic cameras that track people. Visitors will be recorded by cameras, and the footage will be screened in situ and via the Internet. News: the French Minister for the Interior has announced new security measures to be implemented in Paris, tripling the number of surveillance cameras to 6,500 units. New York is also considering a 90 million dollar project aimed at developing their own “Ring of Steel”; similar to the 24/7 surveillance circle in London (65,000 units in the City). In Spain, the city of Barcelona says it needs to install cameras in “problematic areas”. As the above news report claimed, the problem is the thin dividing line between the pursuit of maximum security and the right to privacy. The so-called “policies of fear” and “ideology of security” have become the mantra of a totalitarian controlling system. Finally, many IP surveillance cameras can be found on the Internet. Searching in Google: “inurl:/view/shtml”, you can gain access to 168,000 private and public cameras. Now, apart from control by institutions, we have to add voyeuristic fascination. We are living in a universal, uncontrolled panopticon with hundreds of thousands of cameras monitoring a real Big Brother in a world of glass walls. The installation focuses on the creation of a set of four robots including Surveillance Cameras (CCTV cameras). The robots are equipped with space-based positioning systems and the movement and direction is controlled by an electronic unit based on Arduino. The software that controls all the processes and rules everything is developed using open source libraries (OpenFrameworks) and it is connected to the robots through a wireless system. Depending on the visitors and the robots position captured by zenith camera, the system sends different behaviors to the robots. Besides, there is one IP camera which displays the whole installation and uploads all the data on our webpage, where there are windows displaying images from real cameras (located in Google). A metasystem of surveillance is set in place and the whole installation can simultaneously be monitored by any anonymous Internet user.