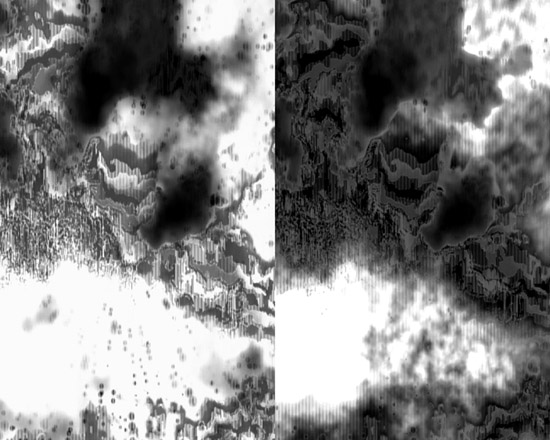 Abstract:
Last Transmission An Acousmatic Projection of Timbres and Landscapes Live Sound-/Video Performance Short Description: The material on this DVD was recorded live and represents a live performance. During the performance we were interacting with two independent media control stations. One station was used to control and modify several video inputs and mix them with a generated and controllable video feedback. Two resulting signals were projected vertically by two video projectors. The second station was used to mix a surround sound signal from a range of audio streams. Since we mix, react, and interact constantly between each other and our machines, each further presentation develops and becomes unique. For more text please refer to the booklet that comes with the DVD or our website: http://www.candela2.net Text by Prof. Dr. Karin Stempel: Candela2 have successfully produced a highly complex structure of image and sound using the most advanced technical means: a visually and acoustically open structure that produces itself interactively through partially controllable and partially controlled aleatory and autonomous feedback. By using interactive multi-track technology, sound and pictorial spaces are created that turn the viewer and listener into an integrative component of a playful, highly poetic process. Here a high degree of improvised constellations of space and time is achieved through the fixation and release, and the linking and networking of perception processes’ but without losing compositional stability. Last Transmission by Oliver Schulte and Maik Timm clearly defines reality as a relationship that operates with several unknowns in fields of the known. The parameters of the experiment are well-defined: two actors, dialogically related to each other, move and act in preprogrammed visual and acoustic fields of reality. The structures can be activated or countered without ever being sure which course of action will be triggered when, and which structural process will be activated when, and then go on to become the frame of reference for new actions and reactions. This ongoing process of action and reaction, delay and transposition, release and refixation of acoustic and visual signs and systems creates a complex set of relations, like a palimpsest, in which the various signals are continually overwritten before it is ever possible to tie them down. Something seemingly familiar surprisingly turns into something strange, whereupon something that seemed to be known suddenly breaks in, only to transform itself just as rapidly into the unknown. The permanent balancing act between activated and virtual segments of reality nonetheless follows an internal logic that is closest to musical improvisation. Themes and patterns are played out, motifs and sequences are set in motion and simultaneously dissolve; they come to the surface and disappear again, they cross over and pass through each other, creating a permanent flow. Chains of association, which are triggered off on many levels, float like loose ends in space and time, and the mixing of optical and acoustic signals thus provokes a never-ending shifting in the axes of reference. Although the technical means of redesigning reality are now near infinite, our images of reality turn out more and more conventional, and only seldom display any paradigmatic traits. There is an enormous number of programs with which reality can be depicted, but this merely seems to say something about the programmability of the image, and nothing at all about programmatic design. Technical means are only rarely understood as medial structures which can be experimentally interlinked to create new sections through space and time, instead of reproducing all too familiar patterns.

Biography:
Oliver Schulte and Maik Timm, an artist duo, work together since 1994. They studied fine arts and visual communications at the School of Arts and Design, Kassel. Their artistic path led from photography to video art, active and interactive media installations and live audio/video performances. Themes like time, momentariness, transition, dissolves, cycles and dualisms are recurring elements in their works.