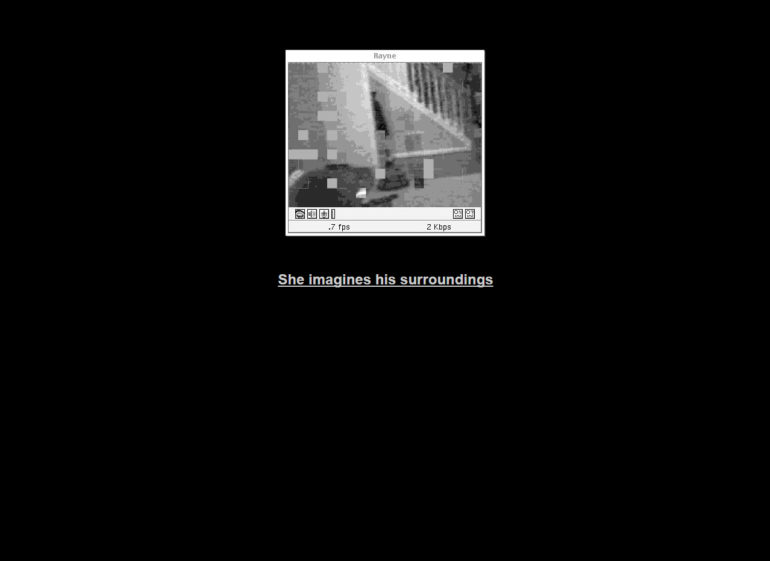 Abstract:
DISTANCE, explores our desire for communication, through connection and disconnection, via fluctuations in transmission and reception between geographically separated participants mediated by the surface of the screen. This work investigates the disembodied and dislocated nature of on-line communication through a re-combination of images and text as a continued exploration of presence, absence and the desire for connectivity within a global networked environment. The CU-SeeMe environment becomes the platform for my most recent Net-Specific Work: Distance. While photographing the windows of video and chat which appeared on my computer screen, I became a voyeur seduced into the on-line world of real-time interaction. While observing a constant stream of simultaneous video and chat, an intersubjectivity emerges– a syntax unique to on-line culture.

Biography:
Tina LaPorta is a media artist who lives and works in New York City. Her most recent work has been created specifically for the internet as a continued exploration of female subjectivity within a global networked environment. ln 1999, Ms. LaPorta received a commission for the creation of Distance, a web-specific work hosted on Turbuience.org (New York) with funding from the National Endowment for the Arts. her work Distance has been chosen as a SEMI-FINALIST in the Arts and Culture category of the Fourth Annual Global lnformation Infrastructure (Gll) Awards. She exhibited an installation of prints from Distance at Atelier Sevigne, Paris this September. Distance will has been featured at the Montreal lnternational Festival of new Cinema & new Media this year. Ms. LaPorta”s net-specific work Future-body Version 1.0 premiered at the Alterities conference this year at the Ecole Suprieure Nationale desbeaux Arts in Paris where she also lectured on her work. This work is mirrored on the Les Penelopes website in France and “remixed” for Rencontres D”Art Contemporain 99; Aix en Provence (France). Future_body v1.0 has been included in SEAFair”99 at the Museum of the City of Skopje (Macedonia), the PaperVeins exhibition, “Landscape” and the upcomming exhibition “Particle Accelerators” at the Boston Photographic Resource Center (Boston, MA). Ms. LaPorta has been an Artist-in-Resident at Ars Electronica”s FutureLab (Linz, Austria) where she created her first web-specific work titled TRACES. Traces has been included in many international festivals including SEAFAIR”98 (Macedonia), the lnternational Festival for New Film (Croatia) and VIDEOMEDEJA (Yugoslavia). Other net.works by Tina LaPorta have been included in the ALT-X exhibition, “Being in Cyberspace”, “Maid in Cyberspace” exhibition at Studio XX (Montréal), the “Sex and Consciousness” exhibition on the FranceArtist website (Paris), as well as the Leonardo Electronic Gallery (MIT press.) Her work has been included in the Web Site for the Uníted Nations” Fourth World Conference on Women (Beijing, China) and the Women and Performance On-Line Journal “Sexuality in Cyberspace.” Ms. LaPorta”s work has been reviewed in Art Actuel, CIAC”s Electronic Art Magazine, Bitniks, Rhizome, HotWired, ZINEN, and L”Autre Web. Her work has been published in Leonardo; Journal for Women & Performance; PForm; Ms. Magazine; Public Culture; Crash; William and Mary Review and in the CD-Rom The Little Magazine, “Gravitational Intrigue: an anthology of emergent hypermedia. Ms. LaPorta has been invited to participate in several on-line symposia including: “Shock of the View,” sponsored by the Walker Art Center, “POV Salon,” sponsored by PBS Television Network, and the Gender in New Media Online Panel at “INVENÇÃO. Thinking The Next Millennium,” conference (São Paulo, Brazil.) Ms. LaPorta has organized and moderated several symposia including “Women in New Media” for the 16th Annual Women in the Arts Conference at Rutgers University, presented her work at the Feminist Art/Art History Conference at Barnard, has given a lecture on Artistic Practice in the Network at Cooper Union and lectured on her work at the University of Applied Arts in Vienna Austria. She also Moderated a panel discussion for the Women”s Caucus of the College Art Association”s Conference in 1994 which investigated the relationship between information technologies and Representations of the body.