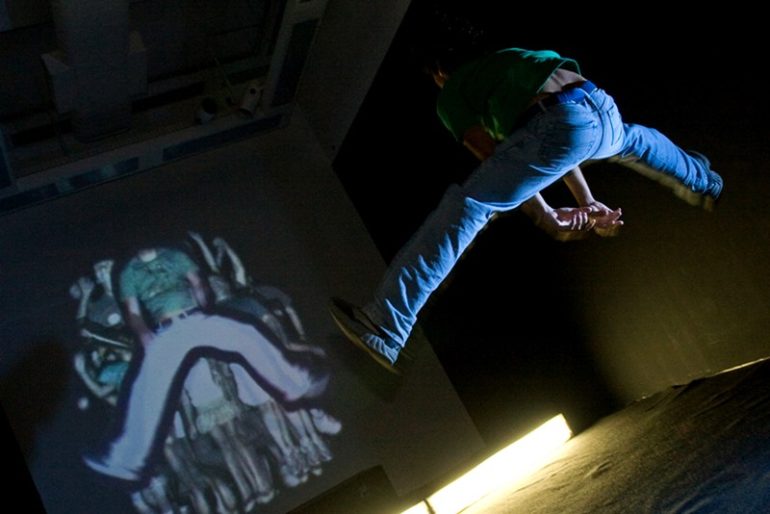 Abstract:
“Jump!” is an interactive video installation that invites the visitor to establish a dialog with his own image through the realization of a simple common action as a trigger for feeding the process. After entering a dark room, the visitor will see himself as a layer on top of a crowd of people jumping endlessly all at once. To really take part, he’ll now have to comply with the “Rules of the Game”, the first and most important one being “You have to jump to be recorded”. From then on, he can start building the image he sees and which he gives to see to the other visitors: while jumping, he’ll slowly replace the jumps of the visitors who preceded him. Through an appealing funny aspect, the work offers the visitor a visual creation space, his body becoming the brush of the animated screen and the screen becoming the ephemeral house of fame of a picture of him rising into the air.

Biography:
Yacine Sebti was born in Brussels , on the 22nd of march 1979, Yacine has had his baccalaureate at the Lycée Français of Casablanca in 1997. He has been a student in different Brussels based schools, at the ICHEC and the ERG, learning video and film practice and history. As a student or as a collaborator he continuously participates in workshops around recent software’s like Max/MSP, Jitter or SoftVNS, given by Telcosystems (NL), David Rokeby 5CA), Jasch (CH), etc … Yacine was very young when he got interested in programming alculators, first as a way of creating useful tools, but also as the projection of an idea inside a machine. For a long time he used random functions as to generate automatic music in different environments like for example the language of the Hewlett Packard 48gx pocket calculator, and after that on pc or mac computers using Mathematica, Director and finally Max/MSP. This specific software has very extended possibilities concerning interactive ideas, which brought Yacine to replacing the “random idea” by the influence of the public’s actions onto the production and programming of software. Yacine is now mainly interested in the creation of environments where the public is pushed to a reflection on his relation with his own image, the “other”, on time and on technology. Yacine has his own installations but collaborates on a regular bases with different artists, as for example experimental filmmaker Pascal Baes, musician-sculpturer Frédérique Marbaix, or videomaker Tom Heene. He often works with Yves Bernard, founder of the Brussels based media workspace iMAL.