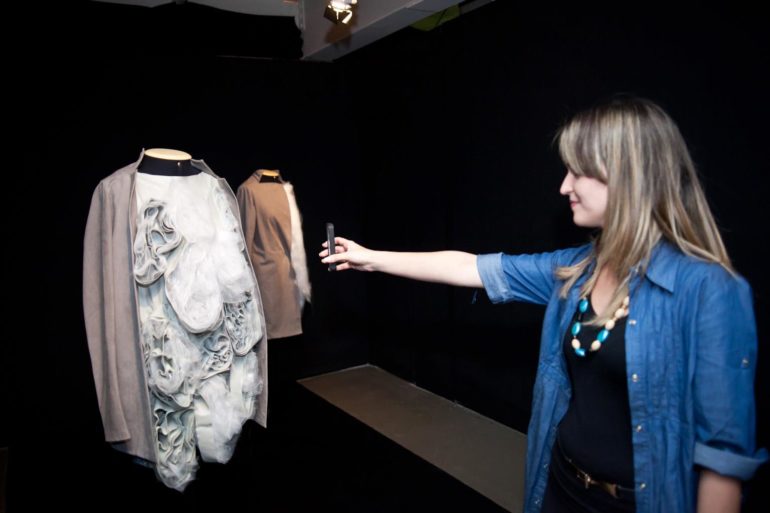 Abstract:
The “Living Pod” project consists of two coats placed on dress form mannequins. The two garments make up a couple in which one is the more “expressive” copy of the other. Actually, when a viewer points a flashlight towards the first garment, it begins to slowly move, while the other imitates these transformations by exaggerating them. As the first coat opens very slightly to allow only a glimpse of its delicate inner fabric, the second unveils an inside comprised of several fabric components which expand and unfold like the petals of a blossoming flower. In unfolding and expanding the fine layers of organza and leather, the garments appear to be breathing. These coats are like characters whose attitudes the viewer may influence. The project invites us to think about the communicative behaviours humans sometimes exhibit.

Biography:
Montreal-based fashion designer, professor at UQAM, and recipient of the Phyllis-Lambert Design Montréal Grant, Ying Gao questions our assumptions about clothing by combining urban design, architecture and multimedia. She explores the construction of the garment, taking her inspiration from the transformations of the social and urban environment. She is the only fashion designer included by the British magazine Wallpaper in its Canadian Top 40. Recognized worldwide, her designs are frequently shown in museums and galleries. Design is the medium, situated in the technological rather than in the textile realm. Sensory technologies allow garments to become more playful and interactive. Ying Gao explores both the status of the individual, whose physical contours are transformed by external interferences, and the garment’s function as a fragile protective space. Her work testifies to the profound mutation of the world in which we live and carries with it a radical critical dimension that transcends technological experimentation.