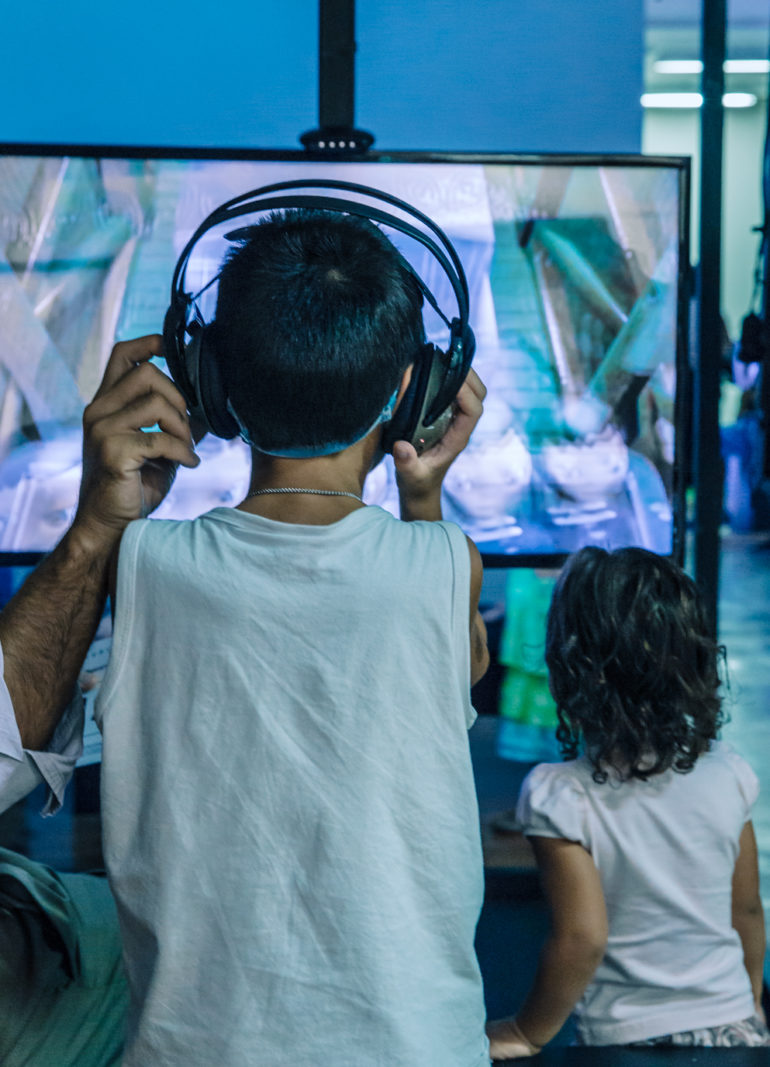 Since its first edition in 2000, the Festival has organized collective exhibitions which give the visitor the opportunity to view and experience the full range of electronic art. Since it started in São Paulo, the Festival has shown digital works by artists from 32 countries, reinforcing Brazil’s reputation as an important contributor to international discussions and reflections on electronic and digital art.
The exhibition “DISRUPTIVA – Electronic Art in the Disruptive Age” brings innovative works to Belo Horizonte city, showing how artists are currently producing their works in a disruptive context, and providing to the public access to new technologies immersion, interaction with new media, artistic pieces that dialogue with the contemporary life and shared experiences.
In presenting these works, Banco do Brasil reinforces its commitment to informing the public about aspects of the visual arts and encouraging access to culture by giving the public opportunities to have a direct experience of the works of artists who reflect on aspects of contemporary society.
Centro Cultural Banco do Brasil
.

When we speak of disruptive ages, we are talking about disruptive innovation. The term was coined by Clayton Christensen, inspired by Joseph Schumpeter’s concept of “creative destruction”. Creative destruction is a concept from the field of economics which aims to explain the disruption to a market when a new company introduces a new and innovative technology that it is an overwhelming success, to the extent that it makes competing products completely obsolescent. Disruptive innovations destroy the competition, opening up new markets. They lead to new consumer and user behaviors. Such innovations support the emergence of different behaviors that lead to new forms of society and culture.
An example of this is the smartphone, with its innovative simulations and emulations, such as the fusion of the cellphone with a camera. This digital convergence between the cellphone and the camera led to a massive increase the sharing of personal images on the social media. And something new emerged – the selfie. An example of mass behavior made universal through the social media. Now anyone can take their self-portrait with a selfie.
The camera has an historical role in transforming the world of the arts. When the smartphone camera appeared, it stimulated a search for innovation, for the transformation of the obsolete and the old, in the artistic and cultural vanguards that prevailed as the 19th century became the 20th.
Throughout the 20th century, artistic research and manifestos sought innovative means of expression. From the point of view of artistic production, the interdisciplinary relationship between arts and technology led to achievements which have effectively transformed the creative process and the way in which art is exhibited. Whether it be the relationship between the work and the public or that between the public and the exhibition space.
Today electronic art has a fundamental role in the contemporary world, because it is one of the few art forms that not only addresses technological innovation but also the diversity of new behaviors which are part of contemporary society.
For 18 years, FILE – Electronic Language International Festival – has presented contemporary electronic arts research and works from artists all over the world. It has always sought to incorporate the new behaviors that have emerged during this innovative process in its conceptual approach. This has resulted in a diverse selection of works being shown which have given the public the opportunity to experience artistic works which seek to express the aesthetics of contemporary society and which have, at times, supported the possibility of new behaviors in the exhibition space.
For the events that will occur at Banco do Brasil Cultural Centers in Brasília, Belo Horizonte, and Rio de Janeiro, FILE has chosen the theme “Electronic art in the disruptive age”. These exhibitions purpose a rupture at the traditional form of art appreciation, here the visitors can experience: new sensations and perceptions; senses the relationship between real and digital movement; interact with the works and immerse themselves into virtual reality.
Ricardo Barreto e Paula Perissinotto
Conception and Organization of FILE