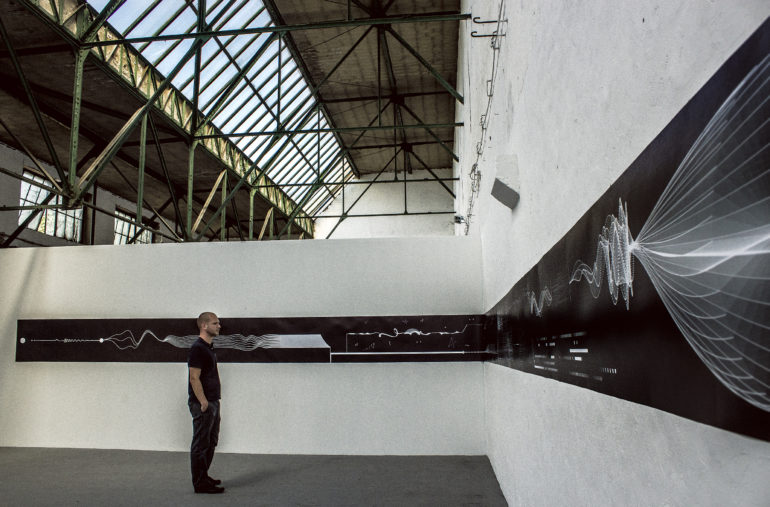 Abstract:
Budapest Art Factory (BAF) is pleased to present to you SYN-Phon; sound performance based on graphical notation by Canda? ?i?man featuring Barabás L?rinc & Ölveti Mátyás. Canda? ?i?man resided at BAF for the month of June as part of its cross-cultural fertilization residency program. SYN-Phon will be exhibited to act, as a visual linguistic delivery through a cogitation segment followed by the sound performance on June 29th.

Coming about to understand the human nature of comprehending linguistics is that of a complex take – on. The constituent elements of language, in general content, bring forward the theory of other minds sharing, with intentioned communication.

Thought varies with the use and absence of language that comes to be found in line with the development of thinking and impulses from our daily surrounding. Eventually language creates our point of view just as much as our ideas and perception of matters, individualistically.

Art plays a crucial role in demolishing the boarders of our comprehension our mindset is framed into by literate language. Human language serves as a rather conservative form of communication when comparison to musical language; where the freedom of space employs as a resort for that broad horizon of that, that in search of cutting-edge form of broadcast.

Candas’s trials of combing various forms don’t necessarily imply the mere creation of a pioneering flash but rather the use of the endless possibilities in associating the known and unknown. Through the unknown, we come about with a new way of thinking that tries to substitute and make space for a new tool of self-expression. Conclusively the graphical notation gives liberate opportunity in creating one’s personal language that holds its basis on feeling the visual and sound in parallel.

Phonation, in accordance to Candas is the presence of sound language in SYN-Phon where the structure is supported by the synthesis itself. Music in its myriad forms extends to exploiting a communicative human language, thereby making the conceptual idea much more of significant importance than the actual tool. For Candas the presence of music in positively charged negatives spaces is a key element for substitution of the unknown seeking to be expressed. By the happening of SYN-Phon the line of musician will be crossed into a rather freely inflicted composer. L?rinc and Mátyás as the musical inputs, on trumpet and cello respectively, of the performance will attain free expression rightfully to the impulses in line of creating a new language.

SYN-Phon sound performance will demonstrate an articulation based on Candas’s intimate collective findings of Budapest during the month of June. Buda and Pest in the separate geographical allocation hold different quintessence natures, in addition to the anecdote of recent flooding events of Duna the performance is meant to reach out to the audience as a sensual expressive language. The sound performance will include sounds, constructed and picked up in Budapest recorded by Candas himself. The whole bulk graphical notation will be available in print form to be part of the introductory assimilation.

Biography:
Canda? ?i?man(1985, ?zmir) studied fine arts in ?zmir Anadolu High School for Fine Arts and graduated from the Animations Department of Eski?ehir Anadolu University in 2009. He spent his one year of college receiving multimedia design training in Holland (2006-2007) With Deniz Kader, in 2011, he founded “NOHlab”, a project which generates collective projects in arts and design.

Canda? ?i?man aims to manipulate our notion of time, space and motion by his work, using digital and mechanical technologies. Taking the sciences of nature and universe as his reference point, the artist combines physical forms with images that are produced digitally. Thus a bridge becomes visible, between the physical world and the digital world. The works of ?i?man stand on a complex base, but the forms are simple, allowing the audience to engage in intellectual interaction with the artwork; in which “process” is the structural element of utmost importance.

Canda? ?i?man has received several awards since 2007, among which are an Honorary Mention from Prix ARS Electronica Computer Animation/Film/VFX and Best Prize in Sound Design from Roma Viedram Video Festival. He has participated in many new media festivals, such as Nemo Digital Arts and Film Festival, ARS Electronica and Todaysart Festival. Canda? ?i?man recently realized Yekpare projection mapping with Nerdworking within ?stanbul 2010 European Capital of Culture activities and ‘FLUX’ audiovisual installation among ?lhan Koman Hulda festival in ?stanbul. The artist is living and working in ?stanbul, represented by PG Art gallery in Turkey.