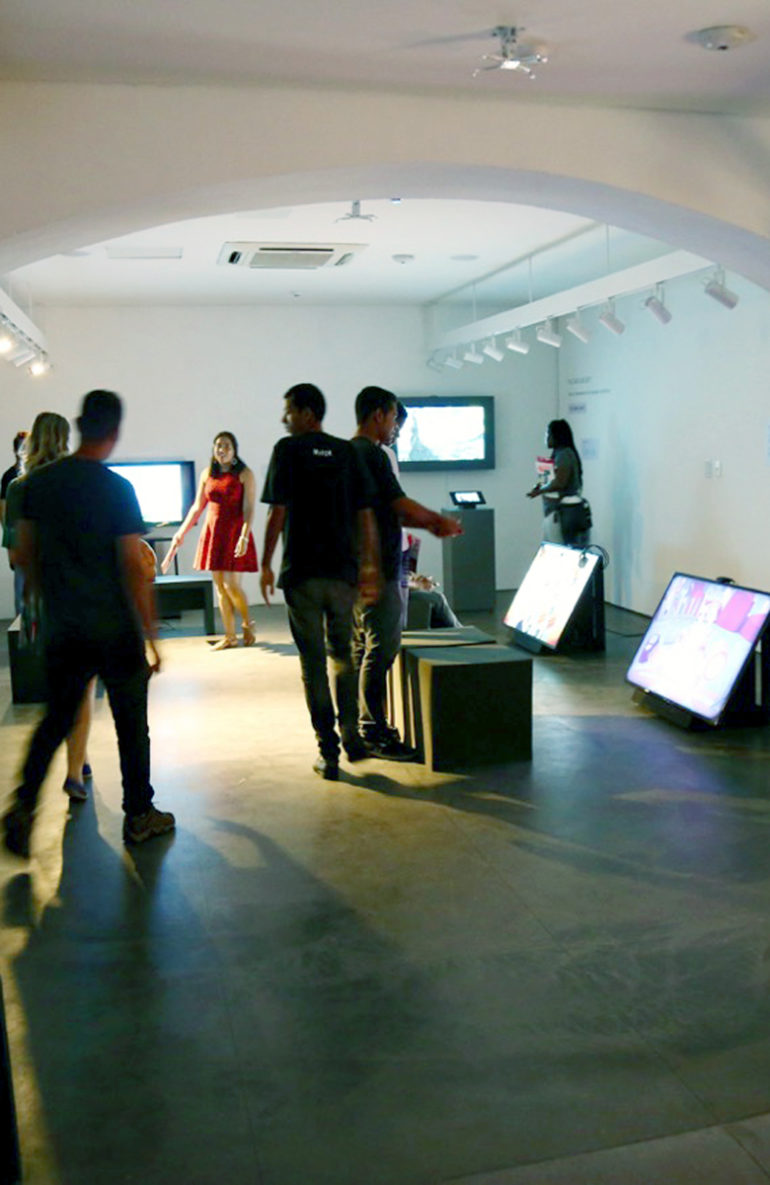 The “Vídeo-Boleba” installation is composed by a TV set and a mechanism that shoots marbles. In the video, two boys take turns playing the marbles, which appear at the side of the screen when they leave the frame, scattering in the space close to the public, and giving continuity to the scene in the material world.

Swings have always held a special fascination for us. As children, we used to play with them. Today we like to reminisce about the enjoyment which we felt while swinging. We felt disconnected from reality, weightless and free.

“Swing” brings these feelings back and makes a dream come true: the dream of flying. Thus, the swing becomes a physical component of an interactive installation. The use of 3D oculus enhances the swinging experience with virtual reality, creating a unique immersive adventure and sending you to a crafted watercolor world.

While swinging you leave the drab monotony of everyday life behind, find a place to ease your mind and regain your strength. You rise smoothly into the virtual world. The flight level depends on how long and how high you actually swing.

The starting point in the digital world is the same as in the physical world: the ground. Here everything is pale and dull. When you have the courage to swing more intensively, you will fly higher and the vibrancy of colors will increase. The climax is in space. Upon reaching it the world reaches its maximum in color intensity. If you want to go down, you have to stop swinging, but the colors around you will stay vivid and bright.

“Be Boy Be Girl” is a multi-sensory experiment that engages sight, hearing, touch, and smell. In the experience, our bodies become more than just our eyes and ears. They are the vehicles to experience and challenge reality.

“Big Huggin’” is an affection game designed for use with a custom teddy bear controller. Players complete the game by providing several well-timed hugs to a 30 inch teddy bear. “Big Huggin’” is an art gesture and game system. The work is displayed as a playable game with a single control – a teddy bear wired for affection. The controller allows for varied levels of hugging, so the player must be careful to hug (not squeeze) the stuffed bear using their entire body.

This is an interactive installation based on Van Gogh’s masterpiece “Starry Night”. The iconic flows of original painting come to life, as an animation. Furthermore, the visitor can interact with the painting, altering the flows by touching. Any influence is temporary and the animation gradually returns to its original state. The background music also responds to the flow. The installation provides an immersive interpretation of the original masterpiece that can be used for “re-discovering” classical art and serve educational purposes.

The installation was developed by POLYMORF with alumni from the Department of Communication Media Design at the Avans University of Applied Science in Breda.

An autonomous, interactive speaking machine, designed to establish automatic communication and synchronization between humans and machines, and between machines and machines. In the installation, a microphone makes the interface with a “choir” of forty cellphones. The whole equipment is ready to capture voices and other sounds. The autonomous speaking machine analyzes the information and establishes equivalences with its memory. In positive cases, the machine generates an audiovisual result with a semantic meaning similar to the captured sound, i.e., it speaks and shows on the screens an identical or similar word to that of the listened word. Soundboxes and the visualization of words on the cellphone screens make a “dialogue” possible, and humans can listen and see the machines chatting.

“Floor” is an interactive interface designed to transfer strength and movement data in the human-human relation and the human-space-time relation. The action of stepping on one of the two ends of the machine produces a wave that is displaced in the direction equivalent to the action. For the other users (not interactors), it is worth noting that the wave in movement lifts the steel plate and the assemblage lifts who or what is on it.

“Tunnel” is a kinetic, immersive and interactive sculpture, composed of 92 porticos that become disordered in function of the position and body mass of the interactor. Numerous users can simultaneously enter and interact with the machine. Interactors agency the machine via their position and weight. An example of interaction is: you go into the “Tunnel” and stand by one of the side walls. In this case, the relative position and the gravitational force of your body provoke variations of floor height. The floor inclines up to 5º, the associated porticos progressively rotate in the corresponding direction and angle, and this propagates undulatory movements throughout the entire installation. For the outside observer, the internal movement or your displacement in relation to the installation produces kinetic optic effects.

“Journey” is an interactive parable, an anonymous online adventure to experience a person’s life passage and their intersections with other’s. You wake alone and surrounded by miles of burning, sprawling desert, and soon discover the looming mountaintop which is your goal. Faced with rolling sand dunes, age-old ruins, caves and howling winds, your passage will not be an easy one. The goal is to get to the mountaintop, but the experience is discovering who you are, what this place is, and what is your purpose.