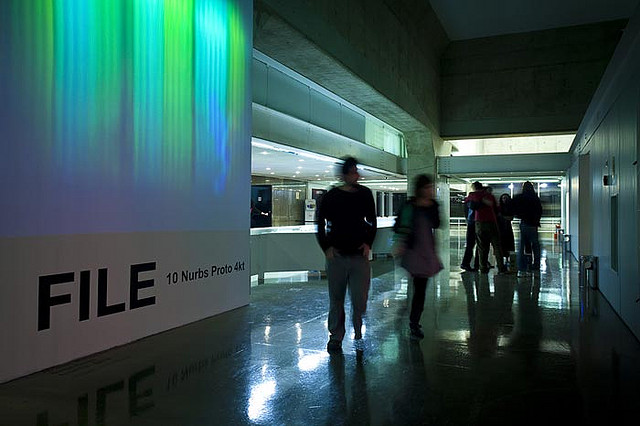 FILE 10 NURBS PROTO 4KT is the title of the FILE 09 exhibition that takes place in São Paulo, Brazil, the program develops in the Art Gallery, the Theater and the Mezzanine of the Cultural Center, at Avenida Paulista, with exhibition, performances, talks and workshops. Free entries.

This year, we have the honor to present FILE 10 — ten years of events accomplished in the city of São Paulo, ten years of discussion on art and technology in Brazil.

NURBS (Non Uniform Rational Basis Spline), a well-known 20th century computer graphic technique for representing smooth surfaces – which according to Lev Manovich, the author of the opening text in the catalog, can become a new tool for cultural theory in the 21 century, along with other computer graphics and visualization tools. Lev Manovich is also taking part in FILE Symposium and FILE LABO Workshop.

PROTO, from “Protomembrane”, title of the performance by the Catalan artist Marcel.lí Antúnez Roca, which happens during the event opening and during the first week of the event as part of Hipersonica Performance programme, at Teatro Popular do Sesi.

4KT, the first transcontinental high-definition broadcasting of a feature film: “While the Night Doesn’t Come”, by the Brazilian director Beto Souza, among the cities of São Paulo (Brazil), San Diego (United States), and Yokohama (Japan).

The 10th edition of FILE – Electronic Language International Festival – the major art and technology festival in Brazil and Latin America shows a great diversity of national and international research and productions. In this 10th edition 300 artists participate – among groups, collectives and individual works – from more than 30 nationalities, with productions in the areas of digital culture.