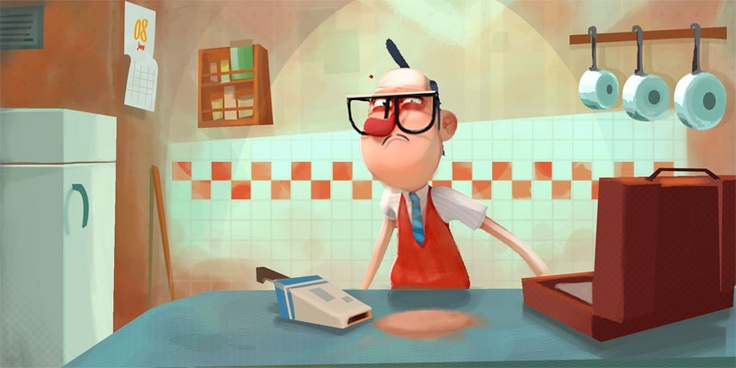 Abstract:
Pete is a nice and clumsy salesman. But he’s also a deadly super secret agent with a microprocessor implanted into his brain by some mad scientists from the government! He has to secretly stop a bunch of badguys who stole a magic stone that can change anything into seafood!

Biography:
Marc Bouyer: I’m 25 and after 4 years at Supinfocom Arles, I worked on the short film “Salesman Pete and the amazing stone from outer space” with Anthony Vivien and Max Loubaresse. I’ve worked with them as the character-designer and I did half of the animation and half the writing.I’m currently working at Ankama Animation on a new project, as realisator and chara-designer. Max Loubaresse: After a year in the school Emile Cohl, I did 4 years at Supinfocom Arles in the south of France. I met Marc And Anthony there and we worked on the “Salesman pete” project for a year. Now i’m working with them on our own TV series named “Muffin Jack and Jean-François” at Ankama, a studio based in the north of France. Anthony Vivien: After two years studying advertising and motion graphics, I decided to join the Supinfocom school where I worked on various projects, the main one being “Salesman pete” where I designed and drew all the backgrounds. Now I am working with the same guy at Ankama Animation.