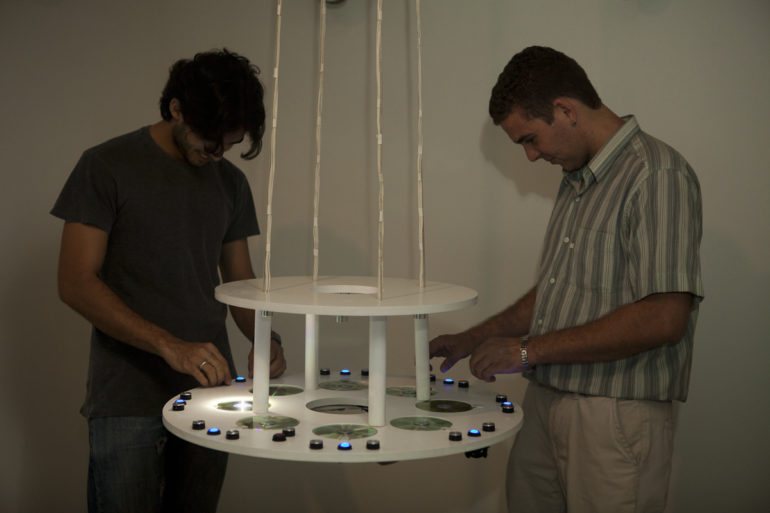 Abstract:
“Disc.o” refers to the early optical sound instruments like Emerick Spielmann’s Superpiano (Austria, 1927) which basically used the same technique of sound creation through a photoelectric process. But “disc.o” doesn’t only use a repetitive method in sound generation, since the whole instrument is based on the repetitive principle of the step sequencer developed later. The circular arrangement of the instrument creates a visual representation of the loop, which is the base of contemporary repetitive music. The interplay of traveling light with the corresponding acoustical response creates a spatial experience of this loop. “Disc.o” consists of two round plates surrounded by 8 speakers hanging from the ceiling. Each speaker is connected to one of the 8 corresponding disc player installed on the main plate. Each player has an associated LED-Spot, fixed on the second plate above, which provides light to the appropriate disc. These LED-Spots are controlled by a simple 8 step switch with changeable speed. A photodiode replaces the usual laser in the disc player and transfers the light through straight amplification into sound. Simple graphical cutout in the disc generate the sound structure. By changing the speed or the track position of the disc player, the frequency of light disruption creates a sound.