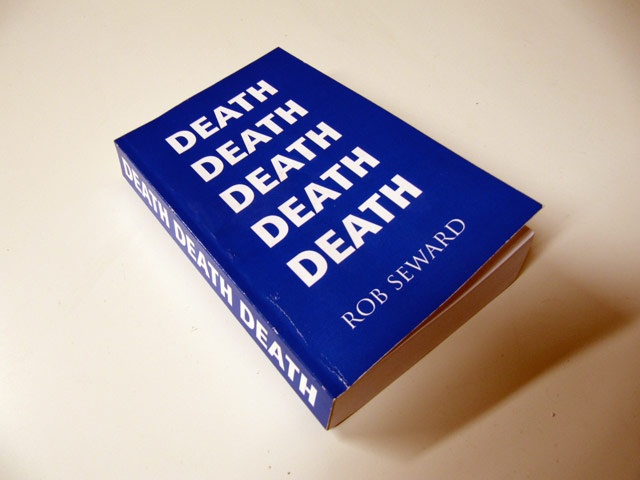 Abstract:
“Death Death Death” is book written by an algorithm. It utilizes a word association study conducted by the University of South Florida between 1976 and 1998. It contains over 10,000 words and their associations to each other. “Death Death Death” traces a path from each word to the word death. The book starts off with the words most closely associated to death. The beginning reads like this: Life – Death Funeral – Death Coffin – Death. Later, it takes several associative leaps to get to death: Enthusiasm – Spirit – Soul – Death Folly – Funny – Sad – Death Bahamas – Paradise – Heaven – Death Waggle – Wiggle – Worm – Maggot – Death. Reading soon becomes humorous, as every line reads like a joke-death is always the punchline. “Death Death Death” is 405 pages, contains an index so you can find any word, and a detailed description of the algorithm.

Biography:
Rob Seward is an artist and programmer based in New York City. His work has been exhibited at CVZ Contemporary, New York; Center For Opinions in Music and Art, Berlin; and Nova Scotia College of Art and Design, Halifax. He has lectured at the Centre Pompidou, Paris; Columbia University; and Location One, both in New York. He worked in collaboration with composer Fred Lerdahl creating software based on the Generative Theory of Tonal Music. Rob lives and works in New York City. He holds a master’s from the Interactive Telecommunications Program (ITP) at New York University’s Tisch School of the Arts.