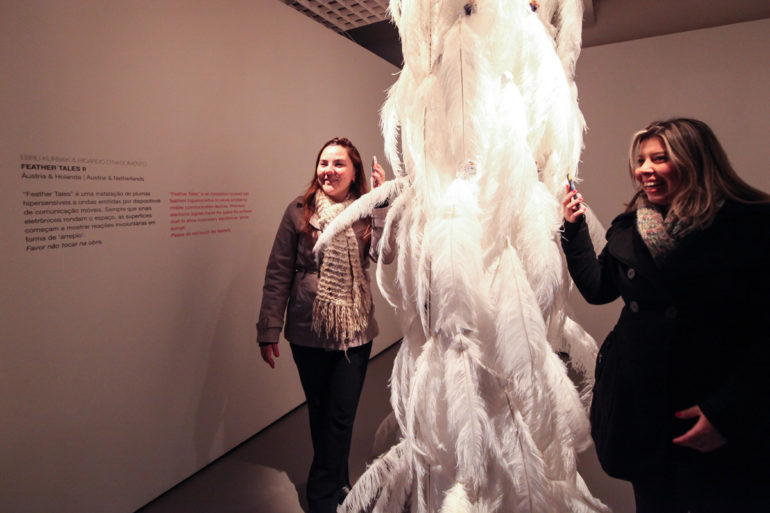 Abstract:
“Feather Tales” is a responsive environment that arose from an imaginary scenario in which a secretive dialogue between electromagnetic waves and their material surroundings become vaguely visible, thus captivating. The surfaces in the exhibition space that are covered with feathers become hypersensitive to waves emitted by mobile communication devices. Whenever electronic signals haunt the space the surfaces start to show involuntary reactions. These reactions are presented in the form of horripilation, the involuntary erection of feathers also known as ‘goose bumps’. Goose bumps are physiological phenomena that can occur in animals in a variety of emotional states, such as irritation, fear, admiration, and sexual desire. Thus, in Feather Tales the existence of a secret dialogue becomes visible to the visitors, whereas the causing emotions remain unknown.
The installation is composed of 200 reactive units that hold 1000 white ostrich feathers distributed in the exhibition space. Each reactive unit includes a custom electromagnetic signal sensor and processor, a servo motor and movable feathers. When a signal is detected in the proximity of a sensor, the feathers start to flicker and move accordingly. The units are sensitive to a variety of frequencies ranging from mobile telephony to WiFi and bluetooth. Hence, the visitors are provided with the chance to interact with the environment using their personal devices.
Produced by LABoral Centro de Arte y Creación Industrial, Gijón.

Biography:
Ebru Kurbak (TR/AT) is an artist, researcher and educator, currently based in Vienna. Her works deal with cultural and psychological implications of everyday technologies.
Ricardo O’Nascimento (BR/NL) was born in São Paulo, Brazil and nowadays lives and works in Rotterdam, the Netherlands. He is an artist and researcher on the field of media and interactive art and investigates body-environment relations focused on the development of worn devices, interactive installations and hybrid environments.