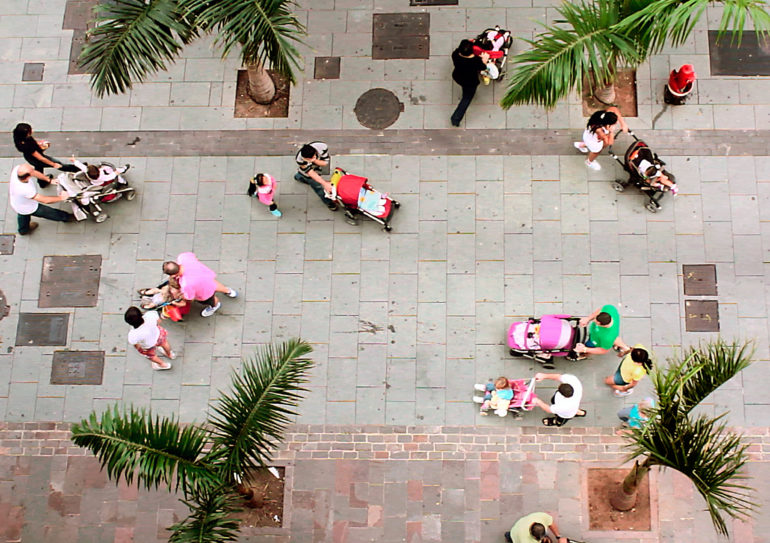 Abstract:
With the web 2.0 began the massive analysis of personal data by tracing the behaviors and movements of users in social networks with the aim to identify common structures. The focus of attention however is not really directed to the individual consumer but rather to certain groups and their shared actions to identify trends or to promote products to a target group. This process of observation happens far away from any control and transparency. The practice of data-gathering has now been put into a purely aesthetic context by filming a city square with a bird´s eye view where a wide number of different people stroll into town. The footage was then analyzed and edited in order to organize the captured people in defined groups under specific characteristics. The new ironical combinations regroup the strollers in backpackers, people who walk the dog, cyclists, yellow plastic bags carrier, couples holding hands, wheelchair users and other groups. The process is developed in a subtle way by starting with the real filmed situation that turns slowly in that surreal horde formation. At the end of the video the passers-analysis successively transforms back into a seemingly random and trivial observation of a city square.

Biography:
*1969 Munich/ Germany; lives and works in Munich and Tenerife (Spain) Ralph´s interest is based on the observation of today’s society phenomena by taking his surroundings and his personal life as a reference to query everyday situations with ambiguous and often ironic artworks. He participated in exhibitions and festival like Piksel, Bergen, Japan Media Arts Festival, Tokyo or Transmediale, Berlin.