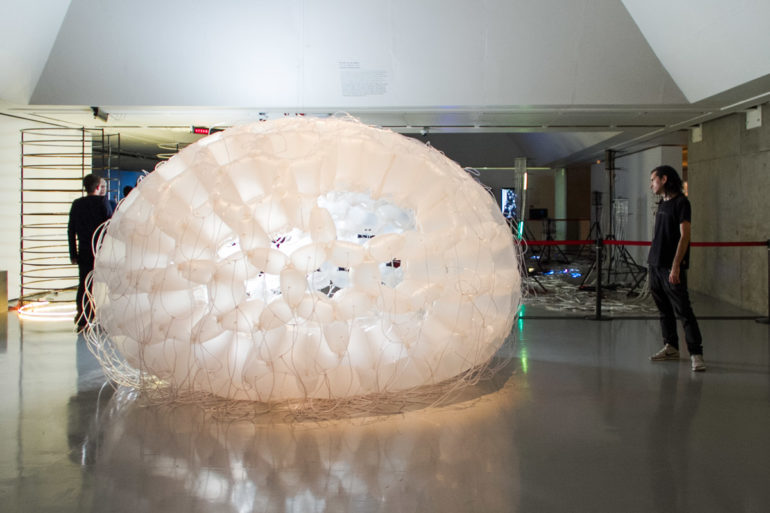 Abstract:
“A Time Capsule of Life” is a growing interactive sculpture. The structure derives from a balloon seed, the Lamourouxe Viscosa, which travels by the wind as a complete survival package. This allows the seed to survive in dry state for a long time. It had a major impact on the evolution of our civilization. Collecting seeds was an important factor to the development of agriculture. It gave us the ability to grow crops. Moreover the structure of this seed gave us insight in new construction methods. It is made up from pentagons and hexagons, an architectural structure which is very common in nature.
The sculpture is created from plastic bags, a contemporary mode of collecting daily goods. When connected together they form a transparent structure of cells and conduits. By connecting the bags with air tubes the bags will be pumped up. This is put in motion by the movement of the audience, which becomes part of the system, allowing the seed to grow out as a mature structure. Without the presence of an active spectator the sculpture falls back slowly. Growth and decay alternate in a process of which man takes a natural part.
When the sculpture is growing or reducing it also causes a cracking sound because of the sort of plastic the shopping bags are made of. It gives an almost meditative feeling. Moreover it says something about the state of mind of the consumer too.

Biography:
Ronald van der Meijs (1966) lives and works in Amsterdam. He studied architectural design and graduated cum laude in 1993 at the Academy of Arts St. Joost, Breda, in the Netherlands, where he was also a teacher in spatial design for 3 years. In 1993 he got his own practice, and focused primarily on architectural design. Since 2001 his work has shifted to autonomous work in which architecture, art, and sound have come together.
He received several architectural and art grants of the Mondriaan Fund and exhibits in various museums, galleries, art foundations and triennials worldwide, such as NAI – Rotterdam, Central Museum Utrecht, Oerol Festival – Terschelling, Dordrechts Museum, Gorinchem Museum in the Netherlands, Martinez gallery – New York, SIM house – Reykjavik, Verbeke Art Foundation – Belgium, Fabbrica Europa 2012 – Florence, Centro de Arte Complutense – Madrid, and the International Triennal of New Media Art in the National Art Museum of China NAMOC – Beijing. He also received several major art commissions from the Dutch Government, including a sculptural assignment for the new HQ of Europol in the Hague, Netherlands.