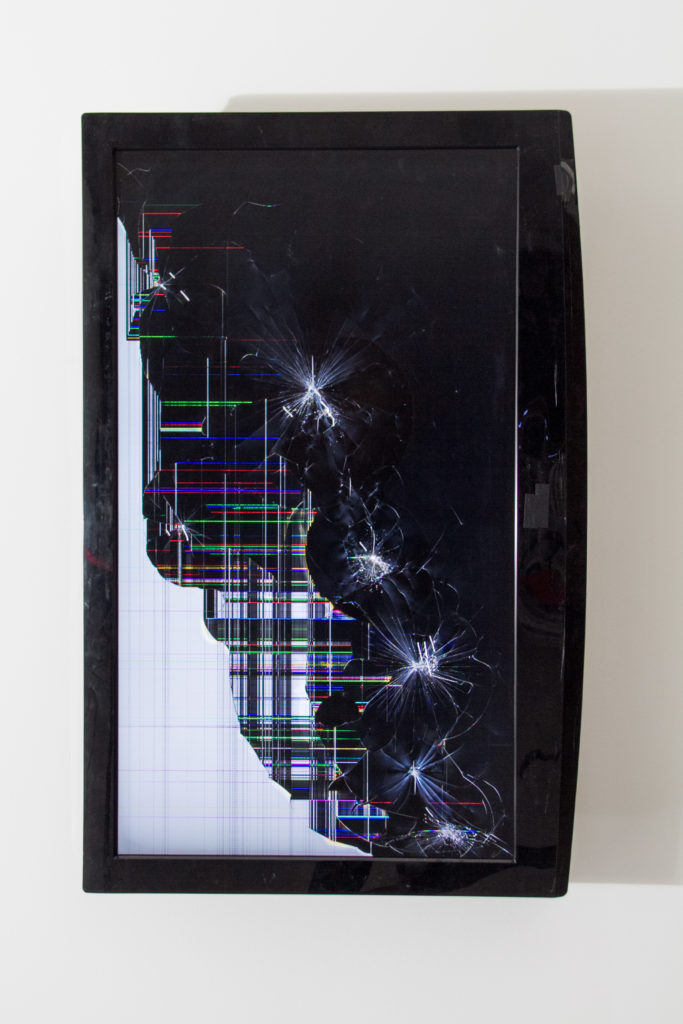 Abstract:
The latest of Oli Sorenson’s remix series is directly inspired by Michelangelo Pistoletto’s (1933) celebrated shattering of large mirrors. Now breaking video monitors in a similar fashion, Sorenson is showing “Video Pistoletto” for the first time in São Paulo at FILE Festival. Premiered in December 2014 at POPOP gallery (Belgo Building, Montreal), the “Video Pistoletto” performances are presented in front of live audiences, to puncture large scale LCD video screens and produce cracks on the glass surfaces, so the liquid crystals splash within the fragments and give the impression of organic forms trapped under light boxes.
By revisiting Pistoletto’s iconoclastic take on vanitas while using digital media, Sorenson attempts to reassess art’s materiality as well as its potential to generate new imagery, but from the destruction of its components. The “Video Pistoletto” series confronts us with a paradoxal twist, an absurd action forged in the same relentless flight of obsolescence and waste as our current consumerist media feeding frenzy.

Biography:
Born in Los Angeles, Oli Sorenson lived and worked in London (UK) between 1999 and 2010, to combine VJing, art shows and curatorial work (including several events at Tate Britain, the Institute of Contemporary Art and the British Film Institute). Sorenson has exhibited at the Millennium Museum (Beijing), the Media Art Institute (Amsterdam), ZKM (Karlsruhe) DokFest (Kassel) and more. He performs regularly in media festivals such as ISEA (Helsinki and Nagoya), Mapping Festival (Geneva) and MAF (Bangkok). He is now based in Montreal, Canada, since 2010 to write a PhD thesis on remix culture.
Sorenson started his artistic career by subverting preconceptions of originality and identity in his digital and performance work, initially recognized under the moniker “VJ Anyone” and collaborated with numerous bands such as Leftfield, MIA, Block Party, Talvin Singh and more, simultaneously to his studio production. Listed within the world’s top ten VJs between 2003 and 2008 by DJ Magazine (UK), Sorenson best describes his approach as that of a remix artist: “I produce art as a DJ produces music.”