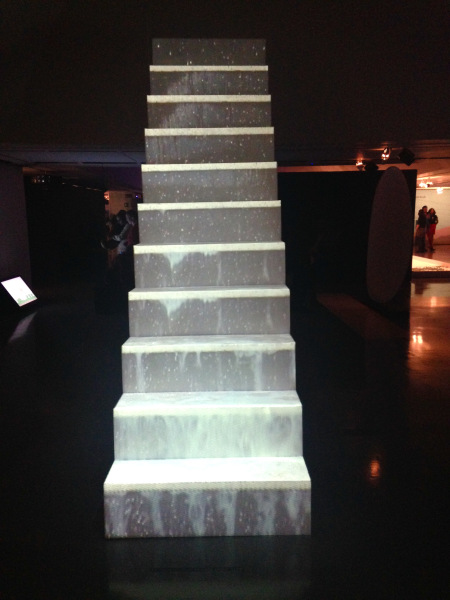 Abstract:
The projection of the water sliding over the stairs challenges the spectator creating a game between absence and presence. Absence of water that is not exactly there, but shows up only represented by a succession of images. The water that exists today, but may not exist tomorrow, becoming a double metaphor of the present and of the future. The moving image shows us the misuse of overly soapy water in a constant leak. Giving way to a contemporary discussion, which is environmental preservation, more specifically, the use and scarcity of water.

Biography:
Angella Conte is a Brazilian artist who lives and works in São Paulo. She has a Psychology degree, but is a self-thought artist who attended several arts and photography courses through the years.
The aspirations of her work are found in the interrelationship created between the individual and his/her environment, supporting his/her stories, exchanges and remains over different medias such as objects, photography, installations, videos, interventions and performances.
Through public and private collections, her work has been exhibited in national and international institutions such as the CCSP – Centro Cultural São Paulo, MAM Bahia, MAC-USP, MARP Ribeirão Preto, MAC-Paraná and MAC Jataí in Brazil; Museu Amadeo de Souza Cardoso, in Portugal; Córdoba, Badajóz and Madrid, in Spain; Perm, in Russia; Ireland; Mexico and Cuba. She has been nominated and awarded at the main Art Exhibitions in Brazil, having been awarded the 4th Award CNI/SESI Marcoantonio Vilaça in 2011. She has experienced artistic residences in different cities in Portugal and in Leitrim, Ireland, in 2005, 2006, 2007 and 2012. www.angellaconte.net