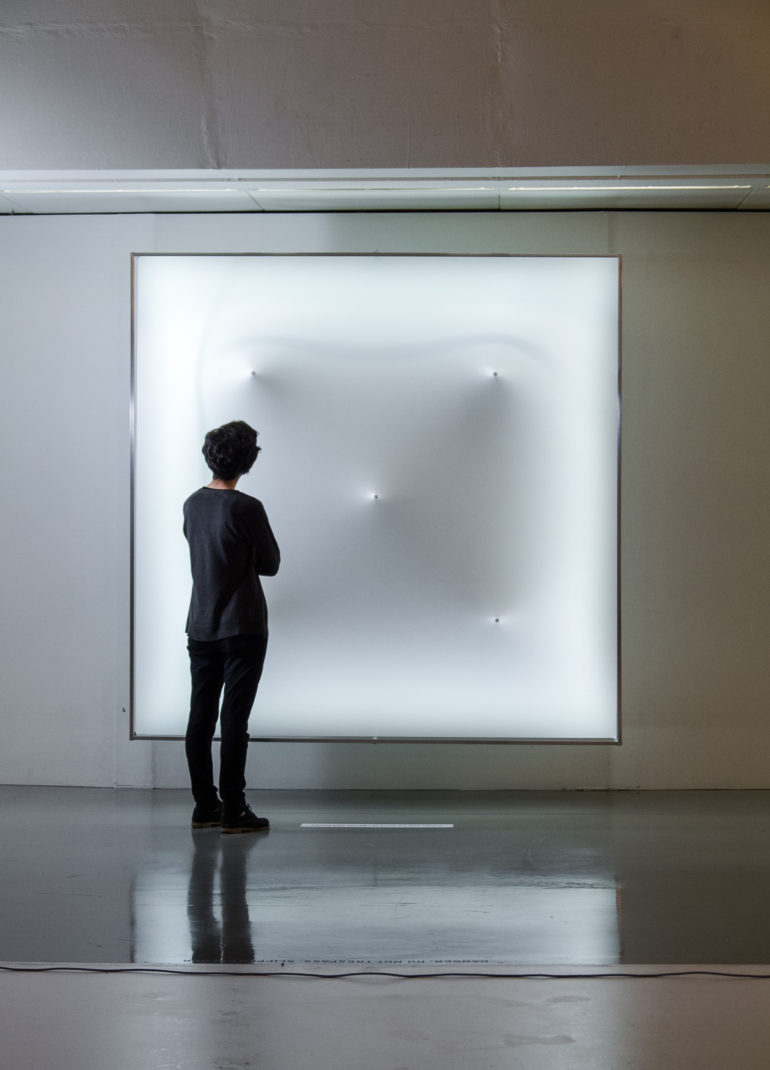 Abstract:
“Hypergradient” analyzes the different interpretations of an impartial consistent statement. The installation repeatedly changes between two states: the “statement” state and the “interpretation” state.

The statement state displays a sequence of characters of a distinct semiotic system, which can be described as a deputy for all known semiotic systems. These single characters are grouped to strings and then form string orders into an abstract proposition. These abstract propositions don’t follow human dwelled principles, they possess inherent logic and can only be decoded when the observer transfers them into his own mindset. In this state, the space containing the installation and the installation itself is lit up with fixed light sources.

When the installation reaches the interpretation state, the whole space changes into darkness and the surface is illuminated by four light sources, which are arranged around the installation. Vicarious for the various views, understandings and pre-learnings of a universal recipient, the sequence and the brightness of the light sources follow their own principles. Simultaneously, the sequence of the characters remains the same as in the “statement” state, but cannot perceived as pure characters anymore. Through the constant change of light, the physical deformation of the surface and the consequent modification of perception, the original statement now has to be interpreted by the observer.

Biography:
Andreas Lutz’s (*1981 in Freiburg, Germany) work analyzes and reveals phenomenon of perception versus reality, principles of abstract aesthetics as well as the relation of semiotics and sound.
Among others, Lutz’s work has been exhibited at the 57th Venice Biennale / Antarctic Pavilion in Venice (Italy), in the Center for Art and Media (ZKM) in Karlsruhe (Germany), the National Art Center Tokyo (Japan), Galerie Mazzoli in Berlin (Germany), the OpenArt Biennale in Örebro (Sweden) and won the Excellence Award at the 19th Japan Media and Arts Festival.