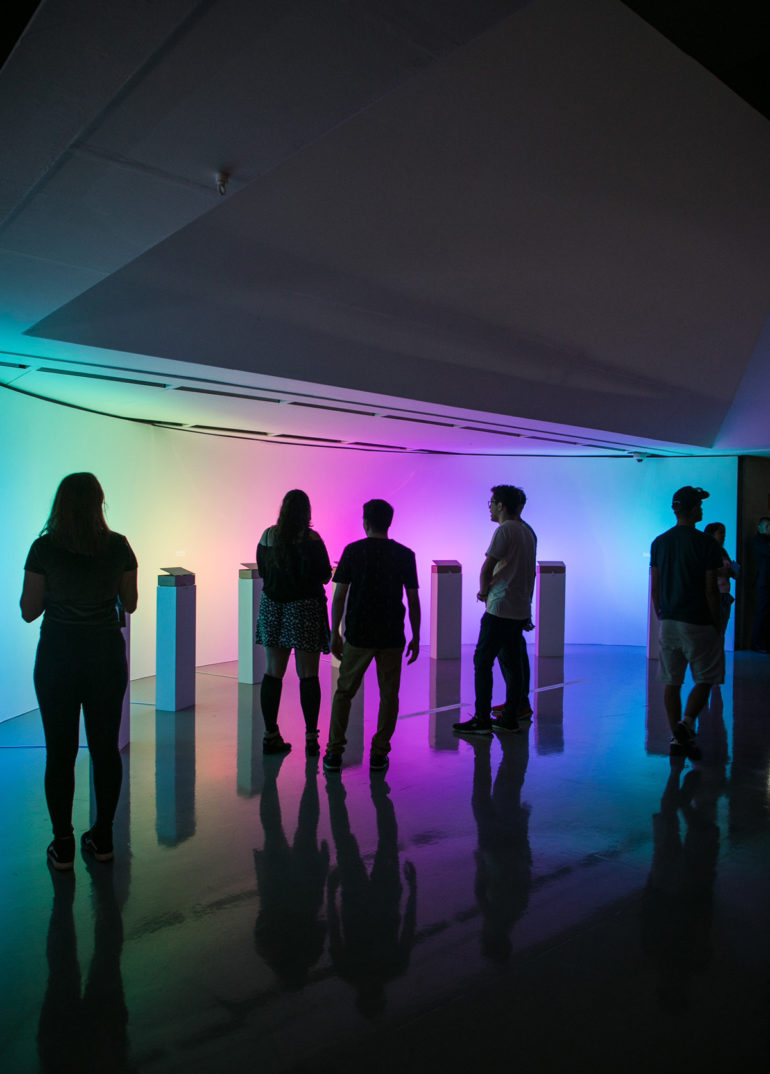 ‘Tempo: cor’ consists of an immersive installation that seeks to modify our experience of time by converting hours into color. A set of chromatic clocks, each set to a different GMT time zone, projects, in a semicircle, the current time in their mathematical and chromatic representations. The conversion between these two forms of time representation is based on an algorithm composed of sinusoidal functions that modulates the RGB colors as a function of the current time, gradually modifying the intensities of blue, green and red throughout the day: at midday yellow predominates, while at four in the afternoon the hour is red; midnight is blue, six o’clock in the morning is green. Side by side, the colors projected by the clocks merge, creating an immersive experience of a continuous and circular time, between the different time zones, that crosses the entire chromatic spectrum. This installation is part of a series of works in which I investigate the relationships between human notations and codes and our experience of space-time, seeking to change the ways we understand it; in this case, visitors immerse themselves in a spatial experience of time that provokes the questioning of notations and perceptions that we usually consider axiomatic. Changing the way we represent time will change our way of experiencing it?

Pedro Veneroso is currently studying for a Ph.D. in Art, has an M.A with Distinction in Literary Studies and a B.A. in the Visual Arts, all from the Federal University of Minas Gerais (UFMG). His research is concerned with the dialog between art, science and technology. He founded the Marginalia Project, won an award at the 4th Filme em Minas festival and was nominated for the 8th Sergio Motta Prize. His work has been shown at institutions such as MAM Rio, MIS São Paulo, Palácio das Artes (Rio) and El Museo Cultural Santa Fe USA. He lectures on the Animated Film and Digital Arts course at UFMG.