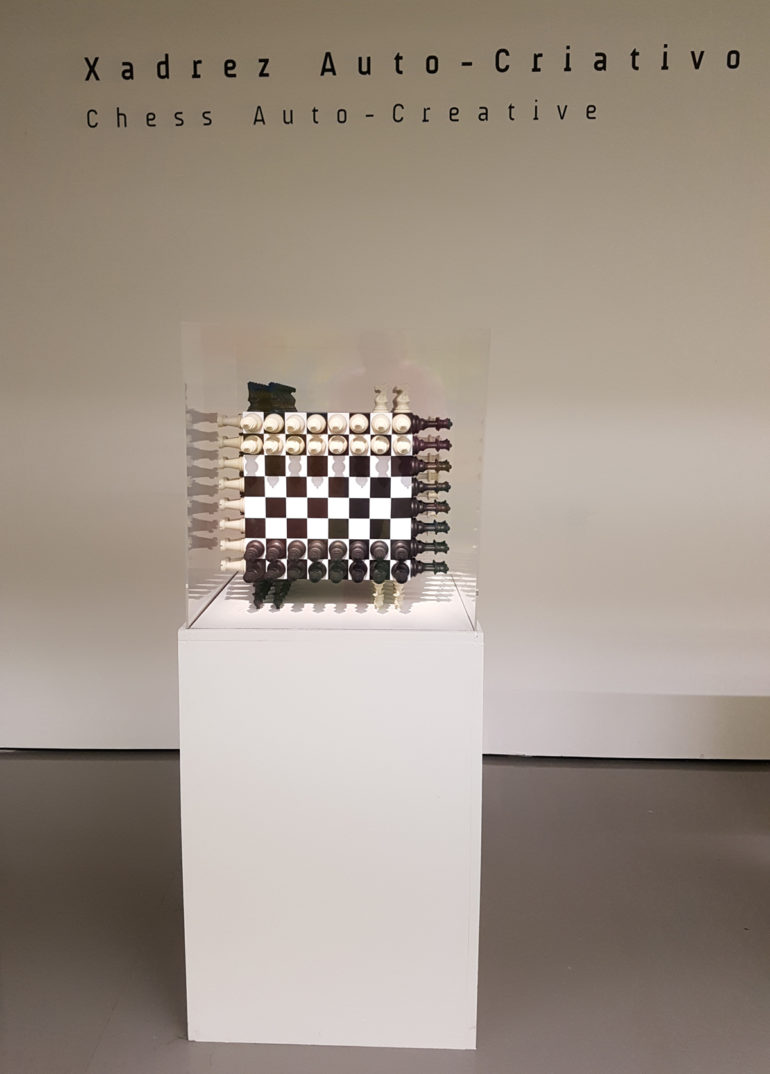 ‘Chess Auto-Creative (CHEAC)’, takes the form of a cube where each face corresponds to an 8 x 8 chessboard. The six chessboards can also be arranged in a line to make them easier to see. There are 16 white pieces and 16 black pieces on each of the chessboards, made up of elements such as: kings, queens, bishops, knights, castles and pawns, each of which moves according to the rules of the game. However, instead of the pieces being arranged as normal, they are first set out in patterns where each element is repeated i.e. 16 white kings x 16 black kings; 16 white queens x 16 black queens; 16 white knights x 16 black knights and so on. The first six games are called the six primitive games or “proto-chess”. Each of them has a Roman number: I, II, III, IV, V, VI, while the horizontal and vertical coordinates are marked using algebraic notation: A, B, C, D, E, F, G, H x 1, 2, 3, 4, 5, 6, 7, 8. Each algebraic position on one board has a corresponding position on the other five boards i.e. on Board I, position A1, corresponds simultaneously to position A1 on Boards II, III, IV, V and VI, – in accordance with the possible combinations allowed by the rules of chess. There are 96 white and 96 black pieces in all – a total of 192 on the boards. Each board has 16 white pieces and 16 black pieces. The 192 pieces always remain on the boards and are never removed but are interchangeable between the boards. ‘Chess Auto-Creative’ can generate symmetrical or asymmetric games. It is symmetric when the white pieces have the same equivalence and position as the black pieces, as in the normal rules of chess. The game will be asymmetrical when the pieces are not equivalent in terms of its elements or positions while, however, always being positioned on the 16 squares for the white pieces and 16 squares for the black pieces, as in the official game of chess. Each time a piece is moved to a new position, symmetrically or asymmetrically, a new variation of protochess is produced – in other words, a new game emerges. All games generated in this way are, in principle, variations of proto-chess – including the official chess game itself. This means that ‘Chess Auto-Creative’ is not a variant of the official chess game, but its origin. The chess games generated by CHEAC can be simple or complex. The simplest games are ‘primitive’ games. Although they are playable, they have no final objective, either because of the absence of the king or by an excessive number of kings. The complex games, however, involve more elaborate strategies, like with official chess, where the objective is to immobilize the adversary’s king (‘checkmate’). Complex games are those that are more problematic and do not depend on luck, where difficulties and obstacles are more difficult to overcome, and goals require intelligence to be achieved. Through ‘Chess Auto-Creative (CHEAC)’, people will be able to find, select and develop new games and new moves.