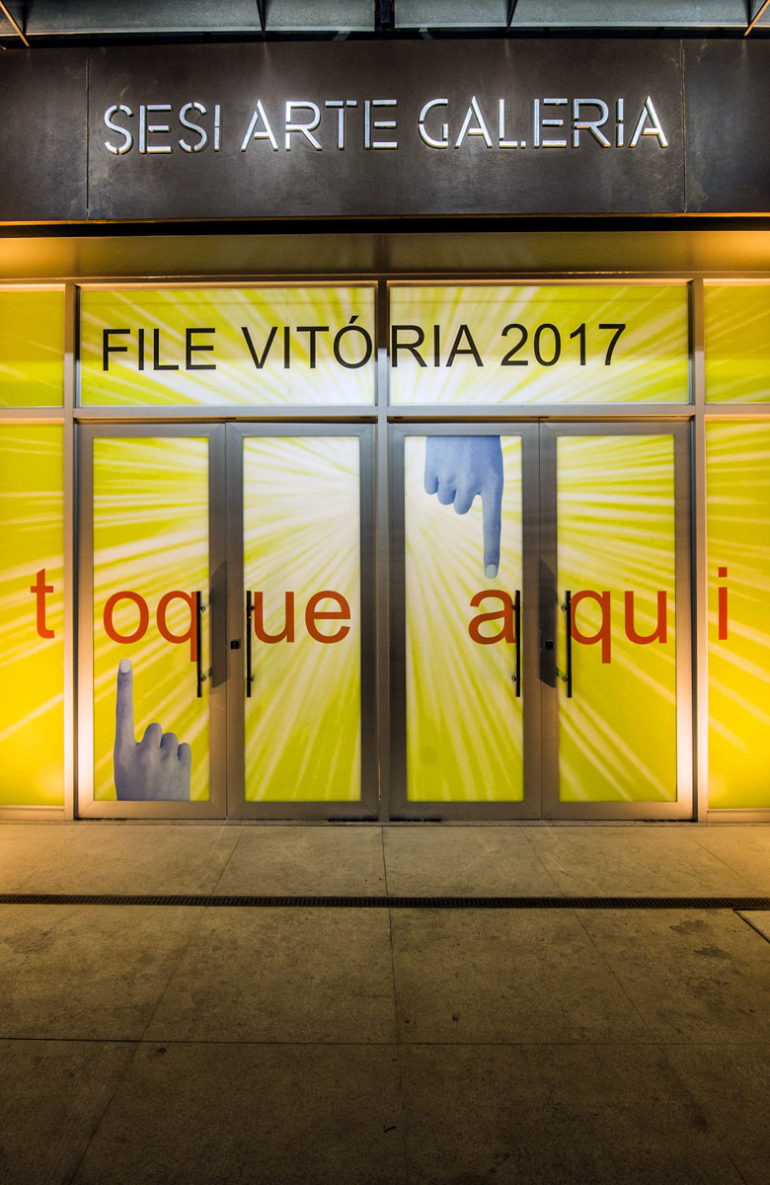 For 18 years, FILE has encouraged the debate about the relationship between art and technology with exhibitions, workshops and seminars. FILE is the largest celebration of electronic art in Latin America, with an annual event in São Paulo and exhibitions in Rio de Janeiro, Belo Horizonte, Curitiba, Porto Alegre and São Luís, as well as participation in international events.

FILE’s first edition in Vitoria offers visitors the chance to interact with the works and amongst themselves using virtual reality devices, including 3D glasses, augmented reality, installations and physical objects. Since the middle of the 20th century, interaction between the visitor and works of art has been one of the principal ways of appreciating art. While the 1960s saw visitors to exhibitions becoming involved in performances and physical installations, by the 1990s the digital world had become part of the experience. The installations selected for FILE Vitoria 2017 give the visitor the chance to experience this integration between the physical world and the new digital technologies.

Amongst the works where the viewer uses 3D glasses, Mac Cauley’s The Night Cafe explores the paintings of Van Gogh from the inside, with an opportunity to meet the painter himself in animated form. In Christin Marczinzik and Thi Binh Minh Nguyen’s Swing, the dream of flying becomes a reality. Sitting on a swing, the more the visitor moves, the more vivid are the colors they experience. The games in the exhibition also give the visitor the chance to interact with the digital world. They include Lovers in a Dangerous Spacetime, from the Canadian developer Asteroid Base; Back to Bed, from the Danish company Bedtime Digital Games; Push Me Pull You, from House House in Australia; and Tearaway Unfolded from the British developer Media Molecule.

Amongst the installations, Fated Ascent, by Donald Abad, uses augmented reality to create a space where the visitor can sense the presence of another visitor, connected virtually to a pile of stones. All that is needed to see the stones is a tablet or a smartphone.

The use of visual devices is also explored by Karina Smigla-Bobinski in Simulacra. When a magnifying glass is held in front of the monitor, images of hands, feet, and long black hair appear from nowhere. But when the viewer moves the lens around, the polarized film changes the colors or shows negative versions of the images. The work changes every time it is viewed, depending on the interaction of the viewer.

Visitor interaction is also central to the construction of collaborative works such as ADA, also by Smigla-Bobinski. ADA is a transparent globe filled with helium which floats freely round the exhibition space. As it moves around randomly, helped along by the visitors, charcoal sticks fixed to its surface mark the walls, ceiling and floor. The collaborative work Floor, by Håkan Lidbo and Max Björverud, is a musical instrument which is played with the feet, producing up to 68 billion sound combinations from six different groups of instruments. Efecto Mariposa (Butterfly Effect), by Patricio Gonzalez Vivo, is an interactive installation where the visitor can create and destroy an ecosystem in real time in a scene filled with volcanic ashes. The visitor can use their own hands to change the topology and atmosphere of this digital world, unleashing all kinds of climatic and topological changes, directly impacting on the ability of life to thrive.

While in Efecto Mariposa we interact with ashes, another form of physical interaction is made possible in Martela (Hammer) by Ricardo Barreto and Maria Hsu, which consists of a tactile robot with 27 motors. The points, vectors and textures of the installation react to the presence of the visitor, whose movements create what may be pleasant or conflicting situations. The work offers the participant a powerful sensorial experience to reflect upon afterwards.

FILE Vitoria 2017 also features a selection of independent animations that dialog with the technological advances seen in FILE Anima+. Independent animated films date back to when animation became an art form. Advances in animation software have enabled independent animators, be they small producers or working on their own, to find more and more opportunities for their work. This opening up of the market is directly related to the speed and ease of communication offered by the internet. The constant and frenetic development of techniques and technologies has led to opportunities for new, more intense and original narrative forms to emerge.

Entry to all FILE Vitoria 2017 events is free.