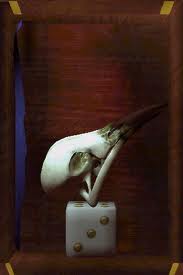 Abstract:
A memento mori for your digital hands. To lift you up when you’re feeling down. And drag you down when you’re up too high. Sometimes, when you’re depressed, it’s good to see something depressing. A contemplation of the fleetingness of life. To help appreciate what you have. A meditative experience. A spiritual toy. A reminder of the preciousness of existing. Referring to still life paintings from the 16th and 17th century, Vanitas presents you with a gorgeously rendered 3D box filled with intriguing objects. Close the box and open it again to see new objects. You can move them by tilting your iPhone or pushing and dragging the objects with your fingers. To create pleasant arrangements that inspire and enchant. Some objects decay. A flower blooms. A bubble pops. Life like an empty dream flits by.

Biography:
Auriea Harvey and Michael Samyn began their collaboration asEntropy8Zuper.org in 1999. They gained notoriety by creating Web sites and Internet artworks. In 2002, they founded the independent game development studio Tale of Tales in Gent, Belgium, where they still live and work. Harvey and Samyn have devoted their lives to the creation of elegant and emotionally rich interactive entertainment. Early Internet artworks blended topics of love, religion, politics and sex along with ambitious web-based performance. Since their shift to games, Tale of Tales have given players and critics much to talk about. Projects like The Endless Forest, a multiplayer screensaver in which everyone plays a deer. And smaller projects such as The Graveyard, about an elderly lady who visits a cemetery. And Fatale, which explores the legend of Salome. 2009 saw the release of their most ambitious game yet, The Path, a short horror game inspired by Little Red Riding Hood.