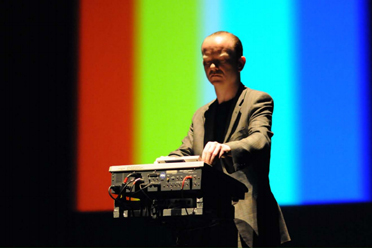 Abstract:
AtomT’s live performance consists in a semi-improvised audiovisual set. The show is partly pre-programmed, partly improvised and therefore takes different shapes (in terms of sound, structure, and duration) every time it is performed. Its technical execution requires an extremely reduced setup. Just one machine is used to control audio and video, which are played, altered, and re-organized live, on stage. Basically, the audio data trigger and play the video data, and with the alteration of sound, modifications of the visuals are produced. The overall envelope of the show contains various “sections” that can be defined as “scenes” of videos and small (cinematic) video clips. While the music is entirely made just for that live performance, the video clips contain material that has been previously released on sound carriers. AtomT’s live set is updated and slightly modified on a yearly basis, and this year it is in its 6th version.