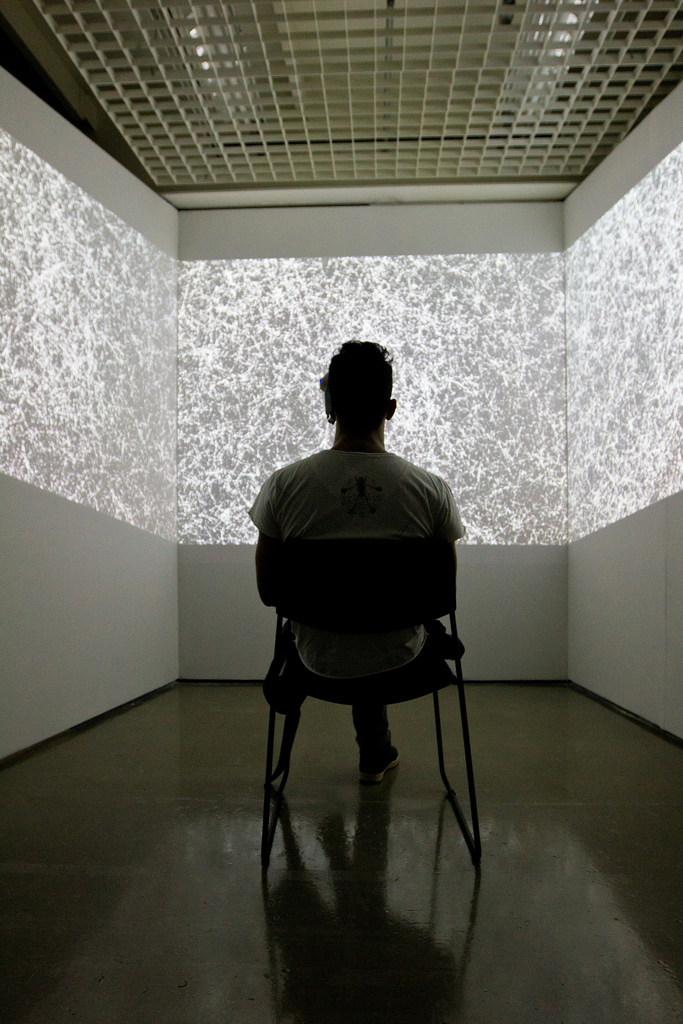 Abstract:
The more we look, the more we see, the more we see the more we look. “Elucidating feedback” is a brain-controlled installation about the creativity inherent in the act of observation. The more attention that is paid to the installation, the more order is reflected in the video and audio. The idea is that we create the finer details of our experience through the act of being attentive. The more we observe our environment, the more we discover, and the result of this active process is the creation of the rich details of our experience. The project uses neuro feedback supplied through interaction between the user and a BCI (brain-computer interface) device. The mindset (the BCI device) reads your brainwaves and this alters how the installation creates form from static. The more attention is paid, the more pattern is formed; as less attention is paid, the pattern breaks back into static. This is intended to form a feedback loop between the user’s attention and the subject of their attention (the projected patterns). The audio-visual aspect of the installation produces pattern, order and detail in direct proportion to the attention that the user is currently paying. If the user is in a state where the mind is freely wandering and not focused on any one thing, the patterns decay into static, bringing the installation back to a state of stasis. As the user starts to focus once more, the static slowly congeals back into a pattern. The images produced by the program are emergent patterns formed by simple interactions between thousands of particles. There are two categories of patterns involved: one is a set of pre-defined patterns and the other one is a series of patterns formed entirely through the system of particle interactions, the combination of these systems enable infinitely complex and ever changing landscapes that the user can explore as if it is a physical representation of their own state of mind, giving the distinct impression that what is shown is a creation of the user, a creation of their attention.

Biography:
Ben Jack is an artist and designer who works mainly in the area of generative and interactive media. Having recently finished his undergraduate studies, he is now working both as a tutor at Victoria University of Wellington (New Zealand) and as a developer for the online game community Minimonos.