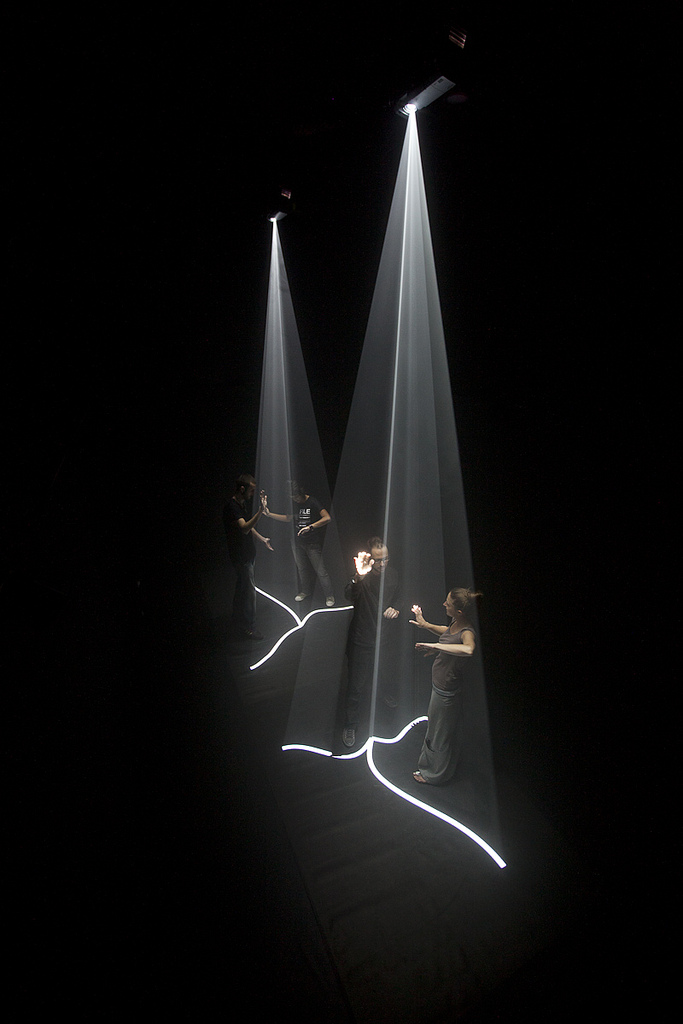 Abstract:
“Luzes Relacionais” (Relational Lights) is an interactive audio-visual installation that explores our relationship with the expressional-organic character of space. The installation uses light, sound, haze, and a custom-software system to create a morphing, three-dimensional light-space in which spectators actively participate, manipulating it with their presence and movements. “Luzes Relacionais” is a hommáge to the work and aesthetic inquiry of Brazilian artist Lygia Clark. The work functions as a living organism with or without the presence and interactions of spectators. When viewers step outside the projected light-space, the system begins its own dialogue with space by means of extruding and morphing sequences of geometric light forms. And when viewers penetrate and interact with the projected light-space, a collective and participatory expression of space unfolds. “Luzes Relacionais” amplifies the three-dimensional fabric of space by making it visible, audible, and tangible to participants. The resulting aesthetic experience encourages an unending relational process of shaping space among participants. © Ernesto Klar 2009-2010 “Luzes Relacionais” is a sponsored project of the New York Foundation for the Arts. This project is made possible, in part, with funds from the New York State Council on the Arts. Additional support has been provided by the generous grants from the Greenwall Foundation and the The Experimental Television Center’s Finishing Funds program. The latter is supported by the Electronic Media and Film Program at the New York State Council on the Arts. Programming Assistance: Joon Y. Moon Production Assistance: Josef Bull, Ryan Hale Photography: Mario Ladera Thanks to: Katharina Rosenberger, Flavio Gaete, Giampaolo Klar, Elizabeth Klar, Mark Stafford, Anton Marini, Tom Swirly, Bettina Johae