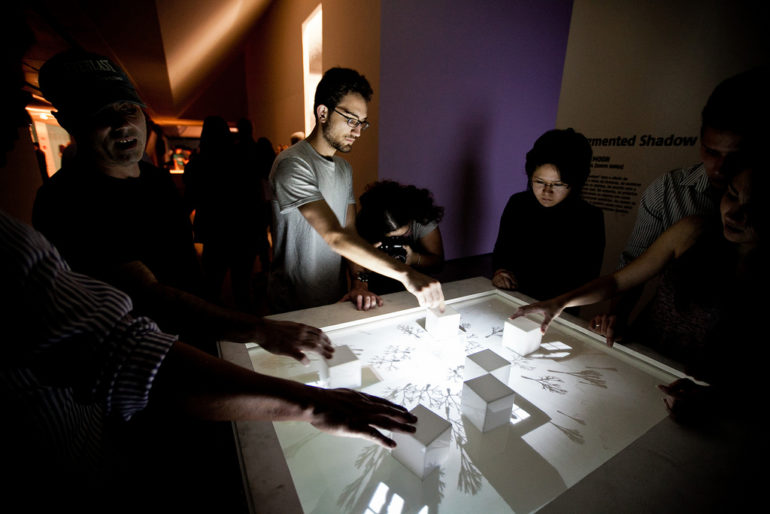 Abstract:
“Augmented Shadow” is a design experiment of producing an artificial shadow effect through the use of tangible objects, blocks, on a displayable tabletop interface. Its goal is to offer a new type of user experience. The project plays on the fact that shadows present distorted silhouettes depending on the light. “Augmented Shadow” takes the distortion effect into the realm of fantasy. Shadows appear below objects according to the physics of the real world. However, the shadows themselves transform objects into houses, occupied by shadow creatures. By moving the blocks around the table, the user sets off a series of reactions within this new fantasy ecosystem. In this installation, shadows exist both in a real and a virtual environment simultaneously. It thus brings augmented reality to the tabletop by way of a tangible interface. The shadow is an interface metaphor connecting the virtual world and the users. Second, the unexpected user experience results from manipulating the users’ visual perceptions, expectations, and imagination to inspire re-perception and new understanding. Therefore, users can play with the shadows lying on the boundary between the real, virtual, and fantasy. “Augmented Shadow” uses this unique interface metaphor for interactive storytelling. Maximizing the magical amusement of AR, it is embedding an ecosystem where imaginary objects and organic beings coexist while each of them influences each other’s life cycle, even though it is not in use by users. Light and shadow play critical roles in this world’s functions, causing chain reactions between virtual people, trees, birds, and houses. A set of tangible blocks allows users to participate in the ecosystem. Users can influence on the system by playing with the blocks or observing the changes of shadows, as if kids were playing with an ant farm.

Biography:
I am a programmer and designer who explores the realm of art and technology. I have previously worked as a motion graphic designer in Seoul and New York. Drawn from these professional work experiences, my works focus on generative visuals for live performance, sound visualization and interactive narratives. Currently I am trying new visual experiences with new technologies such as spatial dimensions and narrative environment of augmented reality.