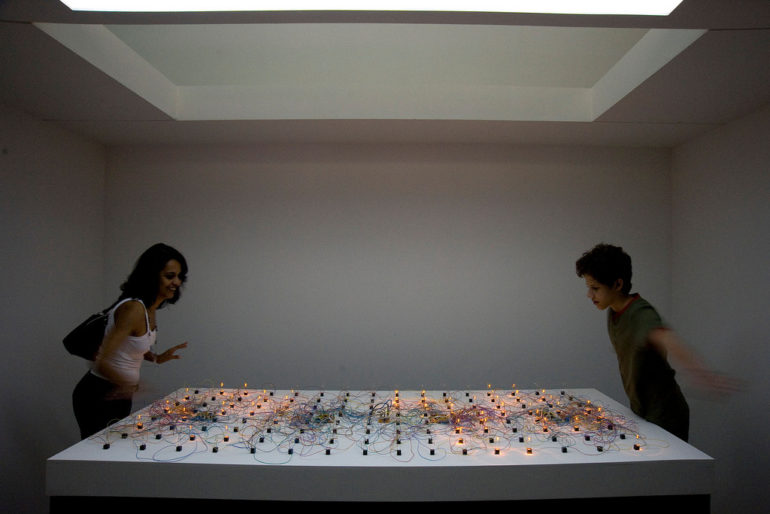 Abstract:
This work is part of a series of projects guided by the possibility to intervene in complex systems from the integration of the spectator as a disturbing element of those systems’ behaviour. “Game of life: Intervened System” incorporates the spectator, who can intervene in this artificial life algorithm, modifying the work state and the system behaviour. For a long time the sciences have been concerned with explaining and reproducing life. An instance of this is artificial life. Today, science has ceased to solely trying to reach these objectives and started to propose the intervention in nature. This work is guided by such issues, not restricted to the creation of artificial life patterns, but also proposing the intervention in the system itself, thus reaching emerging states within the system through the intervention of agents that are external to it.

Biography:
Born in 1975, Buenos Aires, Argentina. He studied systems engineering and image and sound design. He is currently finishing a degree in electronic arts at UNTREF (Tres de Febrero National University, Buenos Aires). He works as a professor at IUNA (National University Institute or Artística), in subjects as programming and electronic art workshops, and at UNTREF giving workshops in the latest years. He won the third prize at “MAMBA” (Buenos Aires Modern Art Museum) and “Limbo” in the category “Experimental multidisciplinary project” (2006), with his work “Dispersiones”, and the second prize with his work “Espacio Cambiario” (2009). He was awarded with the third prize at VIDA 10.0 (2007) given by Espacio Fundación Telefónica with his work “Propagations”, in the category “projects”, and also won a prize in the category “Incentive to Iberoamerican productions” with the work “Infectos” (2009). He has participated in around eleven national exhibitions and four internationals exhibitions, including Latin America, North America and Europe.