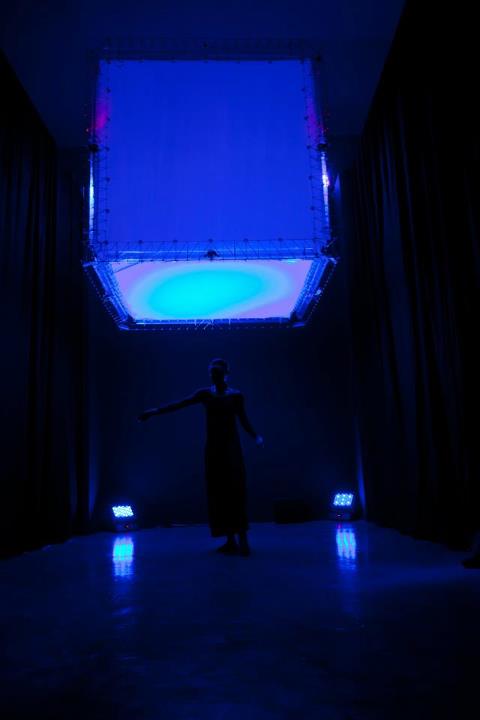 Abstract:
The “Paradoxal Sleep” project is part of a series of works in which big robotized cubes, measuring 2,25 m3, serve as floating structures to be used as platforms for various multimedia projects and performances. In the context of FILE 2012, the NXI GESTATIO team will present a single cube that will move in the exhibition spaces. The cube will continually readjust its position by measuring the distance from the surrounding walls. Its sometimes hesitant movements endow it with an organic quality. At regular intervals, the cube will respond to the vocal commands of a performance artist (Ghislaine Doté) and will exhibit particular behaviours. A hybrid choreography will bear witness to the nascent relationship between the two. During the moments not reserved for the performances, it will be the viewer’s turn to engage with the floating cube and the space.

Biography:
Nicolas Reeves studied architecture and physics at Université de Montréal, and architecture at the Massachusetts Institute of Technology. In 1995, he founded the NXI GESTATIO laboratory, which is dedicated to research-creation in art, architecture, design and computer science. He was the coordinator of the Artificial Life and Robotic Arts research axis at the Hexagram Research and Creation Institute in Media Art and Technologies, before becoming the scientific director of this institute (2001-2008). He was also the vice-president of the Society for Arts and Technology (1998-2007). Thanks to his dual training (physics at Université de Montréal and architecture at MIT, 1988), he is able to combine architectural practice, art and design, an extensive use of bioclimatic data, and computer science. He has worked at the Philippe Madec studio (Paris) and for the architect Jacques Rousseau (Montréal) before being admitted to the Ordre des architectes du Québec with distinction. He is continuing his artistic approach in which he questions the foundations underpinning the notions of order, information and organization in relation to time. A structural engineer (École Polytechnique) who is also specialized in robotics (MA, Université Laval), David St-Onge completed his studies in view of developing technologies that serve artistic needs. He first worked in set design (theatre, museums and TV) and is now active in the media arts field, among others as part of the interuniversity research and media art centre HexagramCIAM. He has been collaborating with Nicolas Reeves since 2009. Originally from the Central African Republic, Ghislaine is a performer, choreographer and composer. Having learned dance, singing and martial arts in Ivory Coast, Ghislaine arrived in Montreal, Canada, with her background of physicality and musicality, which feeds her as a performer and choreographer. Since the end of her bachelor’s degree in dance at the University of Quebec in Montreal in 2002, she has been choreographing and composing her own works. She is artistic director of Virtuo Danse.