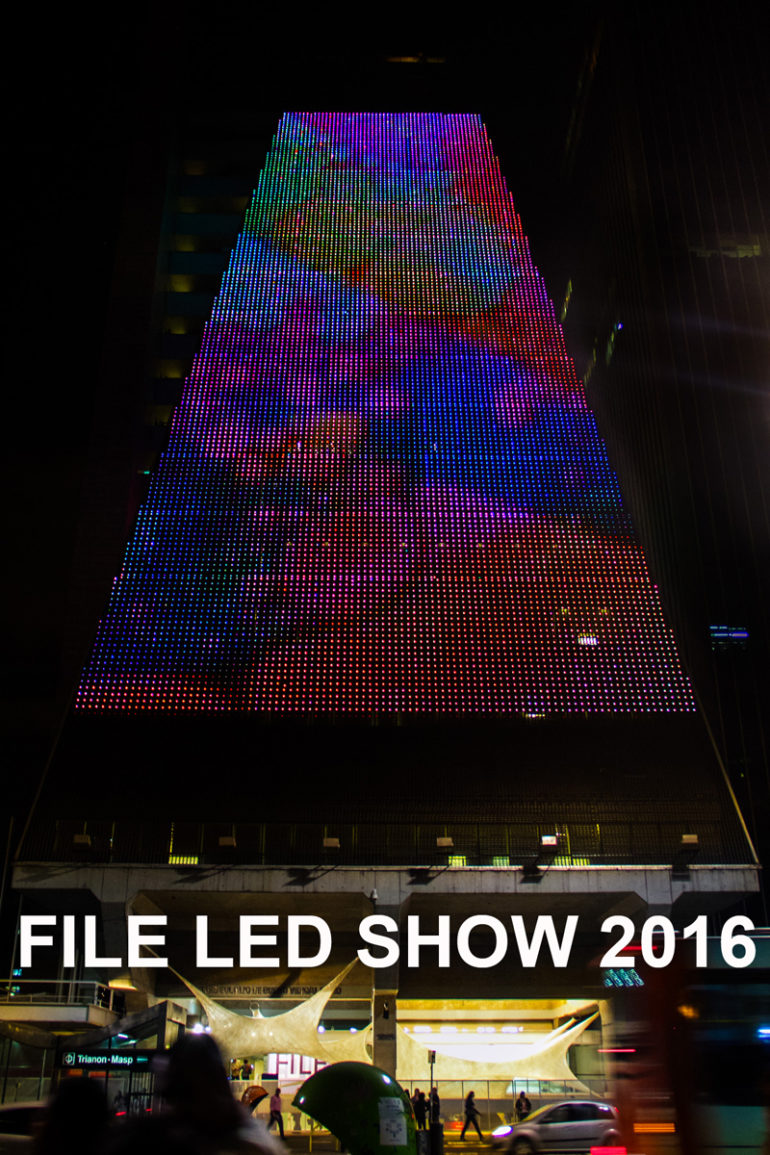 FILE Led Show 2016 presents a selection of six sensorial video art works that are also exhibited inside the Art Gallery of SESI, two of them as installations and the other four as part of the FILE Video Art curatorship. While presenting these works in these two contexts, we seek to emphasize the overlapping of internal and external spaces for which the omnipresence of the screens directs us. From the internet to the street, from the street to the internet, among the communication applications that fit our pockets. The networks that we establish flow through these spaces, unfold in different ways, gain new participants and demand for voice and hearing that often are denied.

This voice spreads through the internet and the street manifestations that with strength resist to discourses that are intended to be one-way and that, therefore, go back in time towards the film device consolidated by Griffith. We know that the fraying of this device – the dark room with a screen on which a narrative film to be observed is projected – is already something that happens since the last century. Films are appropriated, remixed or disposed in different forms on other spaces in order to increase the perception of those who observe it and can now walk in front of the screen. A now classic example is the installation “24 Hour Psycho” (1993), by Douglas Gordon, that projects the film “Psycho” (1960), by Hitchcock, in slow motion, in order to take 24 hours with a single exhibition. In addition to cinema, with the television the artists also indicate other dialogic possibilities that challenge the prevailing unidirectional model. “Hole in Space” (1980), by the duo Kit Galloway and Sherrie Rabinowitz, a reference in the area, already proposed to put geographically distant people in real-time dialogue. The screens placed in the street, one in New York and another in Los Angeles, contained one the image of the other, arousing the curiosity of the passersby. With computer and internet, there is no denial that other dialogic possibilities corroborate with the users’ behavior change that now participate and produce.

The fraying of the film device happens, therefore, with the multiplication of discourses on the screen’s omnipresence. At school, at work, at leisure. At home and on the street. Alone and in groups. If before there was cinema, television and computer, now there are several devices that reduce, enlarge and distort the images, as well as provide exchange between people. They are always with us, changing the way we perceive and relate to the world.

In FILE Led Show 2016, the works that can be touched or seen in compatible screens with the average human body size in the gallery can now reach other enlarged vertical scale, calling passersby to the sensorial experiment in an orientation not so normal in our daily audiovisual fruition. The large LED panel in Avenida Paulista houses combinations of colors, lines and forms that ask us to stop and watch more closely, that we have a moment of silence and meditation in the midst of the urban and digital networks’ turmoil. A meditation so needed in a moment when many desire to speak, but few can hear.