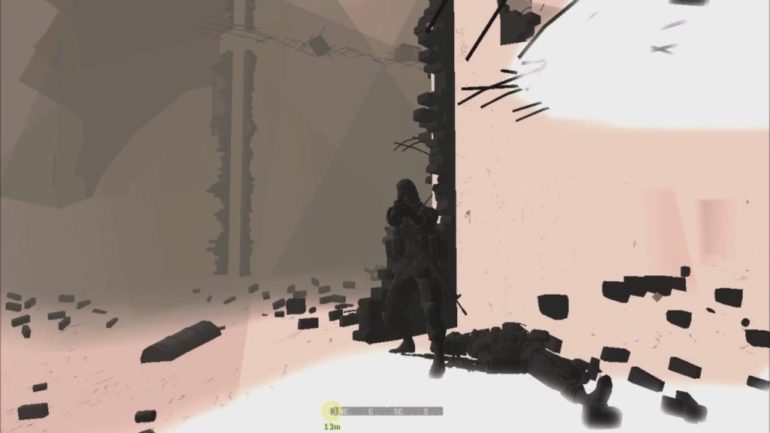 Abstract:
I’m not playing is an audiovisual performance that talks about the relationship between the videogame medium and the culture of simulation in the digital era.
Through the years, videogames have influenced our perception of space/time and our concept of identity, and we have now reached a point where real and virtual worlds are merging their borders. In this process, the videogame as a container of ideological power cannot be underestimated. I’m not playing addresses all this through a war videogame played every day by millions of people: COD4.
During the performance, COD4 is played in real time, but the visual and sound landscapes of the game are transformed. Thanks to a hack of the graphic engine, the game shows us real and virtual battlefields at the same time, fragmented among islands of disturbing hypnotism. The audio track is also de-structured in real time, through a script that assigns new sounds to the original sound effects, which is controlled live during the performance.

Biography:
Marco Mendeni: Born in Brescia, now commuting between Milan and Berlin, Marco Mendeni has long been dedicated to artistic research that experiences the contamination of materials, computer animation and 3D production. All of this with a particular focus on the process that leads the videogame medium to become a social medium. Graduated in new technologies to art. His works has been presented at electronic arts festivals and exhibitions.

Bob Meanza makes music with robots of various types and sizes, be they spring-loaded or quad-core-processor powered. In fact, now he mainly plays live with his battered laptop, but he always looks for some risky degree of instability on the stage. For example, by trying to press too many buttons on a controller, or by improvising with unpredictable human musicians… In his solo set he keeps a song-oriented approach, that yields a kind of electronic music that mixes synthesizer anthems, experimental hip-hop and dub tempoes. He is currently living in Berlin.