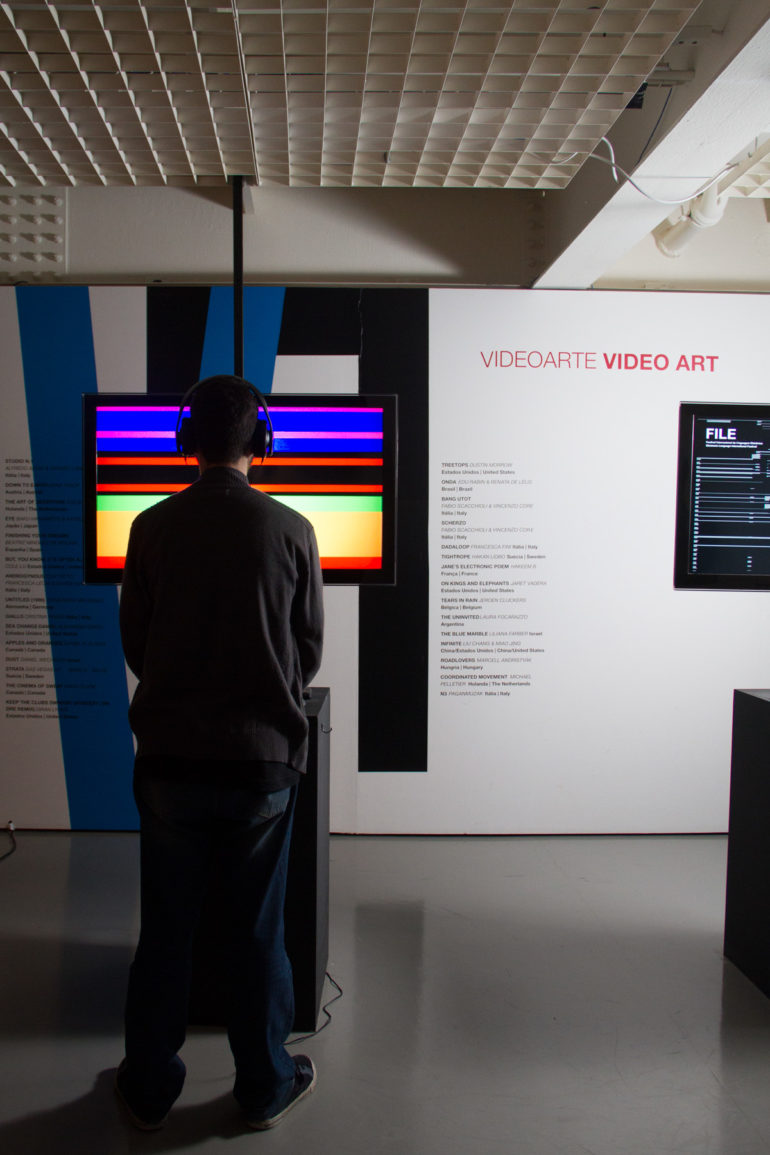 FILE Video Art 2016
Imbrications between us, the images, and the spaces

Not only the images and the screens, but also the online networks and the cameras are everywhere: vigilantes on the streets and in private spaces, in computers and cell phones that go along with us constantly. Almost no event in the big cities and even in our intimacy goes unnoticed, unrecorded or without – usually – immediate dissemination. As accessibility to cameras, computers and online networks has become increasingly larger, it has also increased the number of voices able to manifest through the records, receiving other meanings while circulating among more and more people.

These records can also receive other meanings when made with different devices, such as the recent 360-degree cameras. These new technologies are capable of producing environments with greater immersion, revisiting older cinema, video and animation techniques to assign them other forms of enjoyment. The amateur content made with these cameras already can be seen on video sharing websites, but how the artists will develop their poetic with this same technology is still an unanswered question, with only brief notes, the first steps of a way to come. In this edition of FILE, for example, we can visit a beach in Hawaii with a pair of 3D glasses, sitting on a chair. The installation “Be Boy Be Girl”, by the artists Frederik Duerinck and Marleine van der Werf, proposes to engage us not only by sight, but also by sound, touch and smell. As this work shows, it is clear that the images’ capturing, production and circulation devices change our way to perceive and relate to the world.

With this in mind, FILE Video Art presents this year in the Art Gallery of SESI a cutout of the recent poetic production that combines video and current technologies, breaking the barriers between them and showing how the technical devices change the way we perceive things around us. With forty-four works from over than twenty countries, we seek to investigate how the imbrications between us and the images (with its devices) and between us and the spaces (physical, digital, internal and external) happen.

The highlight of the exhibition is “EYE”, by the artists Baku Hashimoto and Katsuki Nogami, a video clip made for the song by Japanese duo group_inou. It shows the members walking on roads in the desert, over bridges, avenues, bookstores and airports. However, this is no ordinary walk that occurs over time in the same physical space. It is a combination of pictures of the members in stop motion, with a sequence of landscapes captured on Google Street View. The combination of both images refers to our physical and digital experience, a mix increasingly imperceptive in our daily lives.

In addition to the exhibition in the Art Gallery of SESI, the video art is also presented this year in the FILE Led Show schedule. Six sensorial videos connect the Gallery’s internal space with the street’s external space, turning the build into a big screen. The combinations of color, lines and forms are also a request for us to have a moment of silence and meditation amidst the turbulence of the urban and digital networks that indicate the imbrications between us, the images, and the spaces.