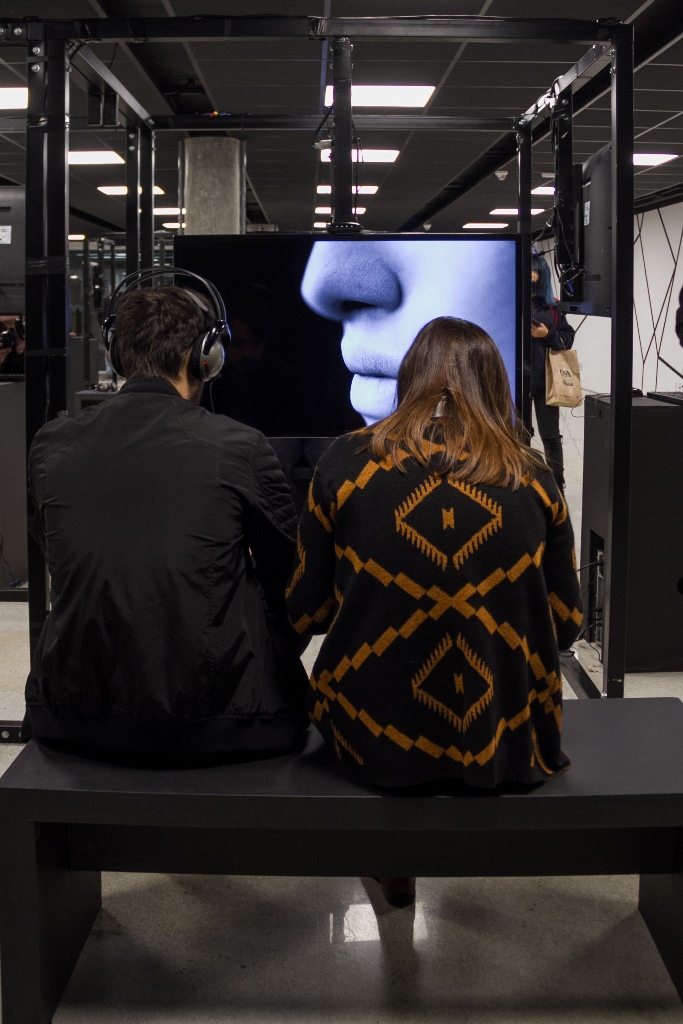 In the 18th edition of FILE – the Electronic Language International Festival – in São Paulo, FILE Video Art 2017 presents a selection of 22 works by artists from 15 countries. Included are six award-winning works from the first edition of the FILE Video Art Award. First place went to “Performance Capture: Part 2”, by the Dutch artist Mike Pelletier; second place to “The Stream VI”, by the Japanese Hiroya Sakurai, third place to “Landscape for a Person, by the Argentinian Florencia Levy. The three Honorable Mentions went to works by women artists: “Forsaken Forest”, by Anna Beata Baranska from Poland, “Garden Conversations”, from the Colombian Diana Salcedo, and “Estado Liquido” (Liquid State) by the Brazilian Fernanda Ramos.
The works chosen for this edition of FILE Video Art demonstrate that when it comes to art, technique is less important than the poetic in its accomplishment. The videos presented in this exhibition include established techniques, such as live action motion capture, stop motion animation and edited found images, and newer technologies, such as software for motion capture in 3D animation. In all cases, independent of the technique used in producing the images, the works invite the viewer to perceive nuances in time. These nuances may emerge from reflection on the historic moment through which we are living or observations of the passage of other possible times, when we are engulfed in the frenetic routines of everyday life.
In “Performance Capture: Part 2”, for example, Mike Pelletier creates images of humanoid beings whose bodies inflate and deflate as they move, creating a dreamlike setting, which is reinforced by a sound track. The artist comments: “what should be used to record, simulate and create perfect virtual realities, succumbs, on the contrary, to the exceptional, the abstract, and the unreal”. Hiroya Sakurai also creates extraordinary images in “The Stream VI”. But, unlike Pelletier, who uses new technologies, Sakurai’s video shows the flow of water in the ancient man-made rice paddies which changed the landscape, creating a poetic environment where the passage of time is shown through the current of the water. In turn, in “Landscape for a Person”, Florencia Levy suspends time, presenting images from all over the world – collected using Google Street View – which are matched with audio tracks of people in conflict of transit or being deported. The contrast between the words spoken at a normal speed and the slow-motion images creates a certain strangeness and highlights the violence involved in these situations of transit, although no images of violence are shown.
The other videos in the exhibition show various situations which dialog with these propositions. In “Forsaken Forest,” by Anna Beata Baranska, the small details that show the passage of time in a simulated forest can be discerned. In “Garden Conversations”, by Diana Salcedo, nature, humanity and the machine dance together until they become a single being. “Estado Liquido”, by Fernanda Ramos, is a different case, in which she presents an experimental audio-visual work on rubbish, referring to the polemic collapse of a dam retaining mine tailings owned by the Samarco mining company in 2015, in Mariana, Minas Gerais. In the work, the rubbish represents fractures, or perturbations, in the flow of the passage of time and the natural landscape.
These works reinforces the idea that, as technique is less important than the poetic in art, decisions on what use to which the tools which we have are put are essential in choosing between making real dystopian scenarios or fighting the trend to ensure that they do not become reality. In this sense, making it possible to perceive nuances in time becomes essential in the discussion about the future we want. As when the “empty spaces” in cinema provide a moment of contemplation away from the action, the works in this exhibition open up cracks in the relentless flow of time experienced in the day-to-day and call attention to issues of the moment in which we live and of other imaginary and potential times.

In “Performance Capture: Part 2”, open source motion capture sequences are mapped onto stock low-polygonal unsmoothed 3D characters. Bodies inflate, deflate and oscillate between states, while movements shift and repeat in offset patterns as information transfers from one body to the next. In the animation, what should be used to record, simulate and create perfect virtual realities instead collapses into the uncanny, the abstract and the unreal.

In the man-made waterways of rice paddies, the water in nature must follow artificial rules. In that way, nature is made abstract, giving rise to a new form of beauty distinct from the natural state. This work is a ballet using the sound and the movement of the algae and the water in this environment.

“Landscape for a person” traces a path through different locations into a sequence of images. The visual material was filmed on Google Street View and then edited with audio interviews of people who were in conflict of transit or deportation.

Memories come back to life in different forms, from objects to the body and the place they inhabited. One should noticed them and start a conversation with them. Directed and edited by Diana Salcedo; Choreography by Martha Hincapié Charry; Music by Ana María Romano; Programming by Miri Park; Costume Design by Natalia Esguerra Villegas.

“Estado Líquido” (Liquid State) is an experimental documentary about trash mismanagement, the leaking of liquefied waste and its consequences. Created through animation with photographs, it was filmed in December 2015 in the district of Mariana, MG, Brazil.

Anna Vasof is an architect and media-artist. With her ingenious and wondrous inventions, she creates funny, poetic and critical objects, actions, installations and videos. Since 2004 her videos and short movies have been presented and won prizes in several festivals internationally. She’s currently working on a Ph.D. thesis about Non-Stop Stop-Motion, an animation method that she is developing.

Bego M. Santiago is a Galician visual artist based in Berlin. She considers her art production as interdisciplinary, and specializes in the use of light as a pictorial and sculptural tool. She aims to explore the feedback between reality and representation, and likes to play with binomials such as: real/fake, presence/absence and original/copy. Light is for her the perfect tool for the generation of simulation and optical illusions, enabling her to give life to inanimate objects, blurring the boundaries between reality and representation, presence and absence.