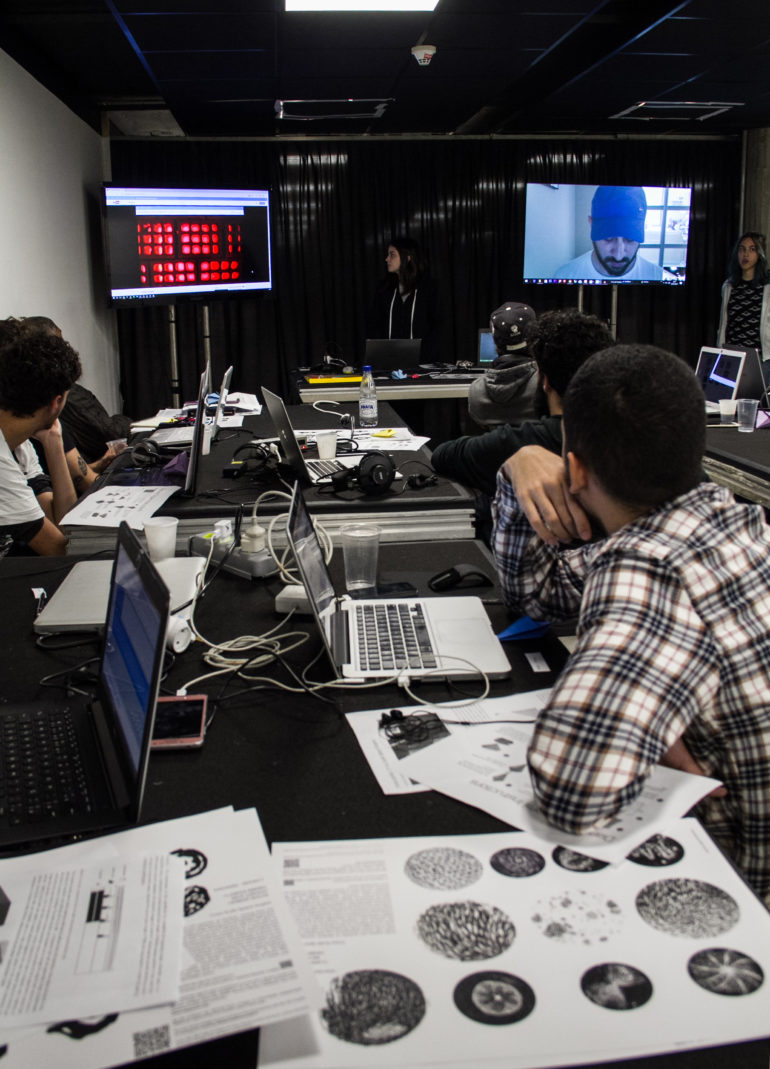 In this workshop, the team of artists proposes to explore strategies for sonification of data derived
from nano-scale interstellar particle images available in online databases such as NASA’s Stardust mission, subsequently working on sound editing to explore different acoustic textures. A multi-platform free software for recording and editing sound (Audacity) is used.
Starting from a discussion about the different processes and technologies for sonification of data and sound editing, the idea is that the resulting productions of the participants can integrate future versions of the installation “Interstellar: Spatial Relief Cross-Scalar” (2016-2017), displayed in ISEA 2017.

BIO:
Clarissa Ribeiro has a doctor’s degree in Arts from ECA-USP, is a media artist, professor and researcher at the University of Fortaleza, where she directs the CrossLab research group and LIP – Laboratory of Innovation and Prototyping. From 2014 to 2015 she worked as an associate professor at Roy Ascott Studio’s BA in Technological Arts in Shanghai, and from 2013 to 2014 she lived in Los Angeles, California, during a post-doctoral internship at Fulbright, joining Art ¦ Sci Center And Lab of UCLA. During her doctorate, when she was part of the group Digital Poetics, she was a visiting scholar at the CAiiA-Hub of the Planetary Collegium in Plymouth, UK. http://www.clarissaribeiro.com

Mick Lorusso is an interdisciplinary artist who interweaves reflections on molecules, cells, societies and environments. With an initial training in microbiology and an MFA from the San Francisco Art Institute, he is a member of the UCLA Art Collective and a UCLA Sci Art Nanolab instructor. He received an honorary mention in hybrid arts at Ars Electronica 2013 for his work with microbial fuel cells, and is a graduate of the Waag Biohack Academy. https://micklorusso.net/

Stavros Didakis is a maker, artist and researcher with a PhD in Media Arts Technology for the i-DAT research group at the University of Plymouth. Current coordinator of the Roy Ascott Studio’s B.A. in Technoetic Arts in Shanghai, during his academic career he has studied Sound Engineering, Media, Music Technology and Audio Systems, Sonic Arts and Interface and Interaction Design in Athens, London, Belfast and Linz. http://i-dat.org/stavros-didakis-mphilphd-researcher/

Clara Reial studies Architecture at the University of Fortaleza and since 2015 she is a CrossLab researcher and collaborates on projects in the intersections among art, architecture, science and technology. She is currently the assistant professor of the discipline of Project Experiments given by professor Clarissa Ribeiro. As an independent artist she explores movement and repetition in experimental videos.

Andressa Hadig Haidar is finishing the Architecture course at UNIFOR and has collaborated with the CrossLab group. In her final undergraduate paper she explores the subtleties of human understanding of the phenomenon of death and is producing an experimental installation with biosynthesis that tests sound and chromatic variations and impacts on the perception of time and space.