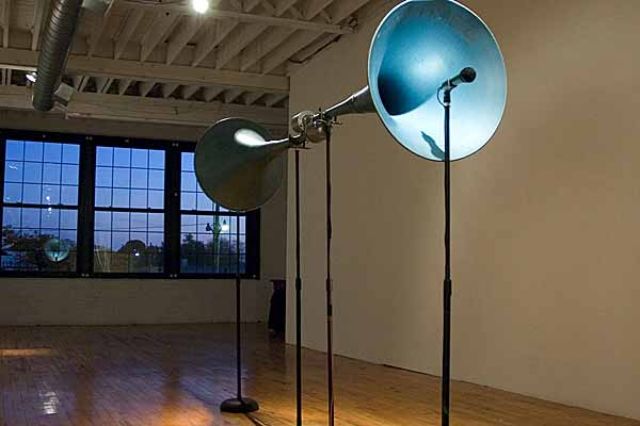 Abstract:
When Pulse Becomes Pitch is an interactive audio installation consisting of a pair of aluminum public address speaker horns. The visitor speaks into a microphone placed in front of and almost swallowed by the bell of the horn. Taking cues from phonemes, consonants, bilabial fricatives, and glottal stops, the qualities of the visitor’s spoken voice triggers another voice, a foreign tongue resonating from the horn. When the visitor speaks, the other speaks. The relationship is immediately clear. The question arises, how is this voice also mine? Is this a response, a translation, a refl ection? What am I now saying? What is the signifi cance of simultaneous translation ignorant of cultural considerations? The less evident relationship is that of the silences. My silence triggers silence in the other. It is this silent relationship that lingers with the visitor. After the active vocal coupling is broken the coupling of silence remains, echoes with the visitor.

This interactive acoustic framework makes urgent the causal relationships between voices. Questions of power, identity, and agency persist even in the most emergent technological context. What is generated when the voice is doubled, cancelled, called back to itself? Who controls the situation, determines the parameters, maintains the apparatus, defi nes the sounds, contextualizes meaning? When Pulse Becomes Pitch: A pulse, a beat, a rhythm becomes a pitch, tone, slant, distance.

Biography:
Andrew Johnson, Artist and Associate Professor of Art, Carnegie Mellon University. http:/artscool.cfa.cmu.edu/~johnson Andrew Johnson (BFA School of the Art Institute of Chicago; MFA, Carnegie Mellon) teaches at Carnegie Mellon University and, in 2006, was artist-in-residence at Korean National University of the Arts in Seoul. He is co-founder of the socially engaged collective, PED, that performed recently in Chongqing, China and Rio de Janeiro, Brazil. Johnson’s work addresses exigencies of daily realities and undresses the refined aesthetics of art. Venues for his work across diverse media have ranged from the Chelsea Museum of Art and Alternative Museum in NYC and SIGGRAPH 2007 in San Diego to Amsterdam’s Arti et Amicitiae and Seoul’s Gallery 175, from A Space and McMaster Museum of Art in Ontario to campus galleries at Wesleyan, Chatham, University of Georgia-Athens, UNC Chapel Hill, Maryland Institute College of Art and Center for Advanced Art and Culture in Aix en Provence, and from festivals in Minneapolis, Victoria and Belfast to conferences in Leeds, Liverpool and New York City. Johnson also contributes images and writings for a variety of publications including: Hayden’s Ferry Review #38 (Arizona State University): Fables of La Fontaine (University of Washington Press); Critical Perspectives on Contemporary Painting (Liverpool University and Tate Liverpool); and The Brecht Yearbook 27 (University of Wisconsin Press).

David Tinapple, Artist and interface designer. MFA candidate, Carnegie Mellon University. www.davidtinapple.com Tinapple bridges the gap between artist and engineer. Central to his practice is the creation of his own tools and systems for exploring images, video, sound, and interaction. His aim is to illuminate and confront the forces at work inside and between us, to examine the consequences of our deep assumptions about the world. Tinapple has performed and shown work internationally at venues including Festival International Nouveau Cinéma Nouveaux Medias Montreal (FCMM 2001), RELINE (2002), X|FEST NYC (2003), Courtisane Film Festival Belgium (2003), the Ohio Center of Science Industry (2003), and Chaise DVD magazine (2005). He has performed live video compositions with musicians including Mouse on Mars, Oval, Jonas Sharp, Amon Tobin, Monolake, Marumari, Safety Scissors, Joshua Clayton, Carl Craig and Maryanne Amacher. Tinapple has also produced interactive CD-ROMs for Saturday Night Live, human-computer interfaces for medical equipment and intelligence analysis, and audiovisual art installations. Tinapple has held research positions as a cognitive engineer at the Ohio Supercomputer Center, the Cognitive Systems Engineering Laboratory at Ohio State University, and at the Cognitive Systems Engineering Center in Pittsburgh. He holds a Bachelor’s degree in Fine Art and will complete a Master’s of Fine Art at Carnegie Mellon University in 2007.