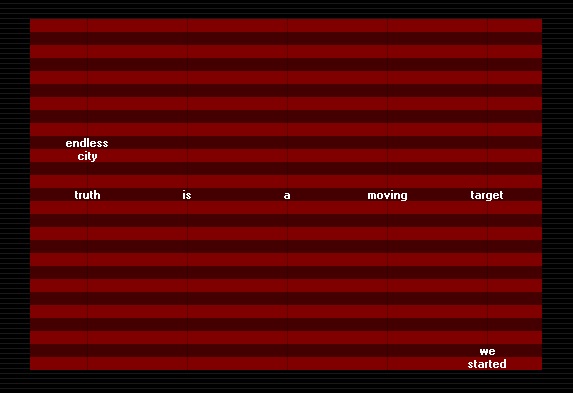 Truth is a Moving Target

Abstract:
The internet project “Truth is a moving target” is a first attempt to work with text material I collected from 1995-97. These texts, which I simply labeled “sentences”, are thoughts I wanted to record – being afraid that I can not remember them later. The first sentence I wrote down was”Truth is moving target”. The words state my doubt AND my belief in “truth”as something essential beyond truth as a dictatorial dogma. The balance between doubt and belief is something we have to negotiate permanently. Truth may have died as an ideology or religion but it still has to serve as a skeleton of our project called “life”. We have to be certain about things to handle our daily business and to bridge the gaps between the split- seconds. The sentence “Truth is a moving target”,now serving as a title,initialized the process to trust the capability to find our personal history of narratives .In this case this history crystallizes in short sentences.Their order is almost random,their meaning often ambiguous. For a long time I wasn”t sure if I ever should communicate my records but it was more a question of how to present them. The open form of an interactive crossword puzzle on the World Wide Web seemed to be the most appropriate concept for this project. There are no traces other than the temporal memory of sentences in flux. Everything is changing quickly. Even the technology that enables us to tap into the global village may be obsolete and forgotten by tomorrow. The oppearance of the piece will never repeat itself. lt always starts with the title and then the user decides by interacting with the mouse how the piece develops. lf the viewer doesn”t want to provide any intentional input the program code itself builds a permanently changing grid of sentences. The intertwining of active and passive participation, linearity and controlled randomness shows the flexible structure of meanings. The project was made possible through a commission by the Austrian Cultural lnstitute New York.