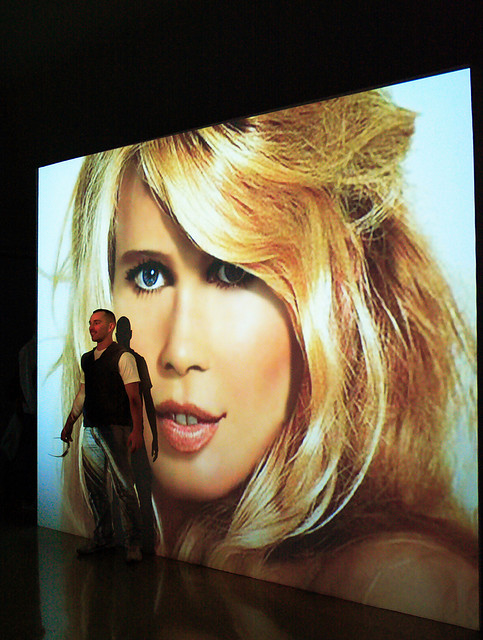 Abstract:
The viewer is confronted with a face on the screen that is constantly, almost imperceptibly changing. The perfect hair and make-up give rise to the expectation of a beautiful model, but this is not always fulfilled. The starting point is super-model Claudia Schiffer, however, the facial features are in a state of flux, ‘mutating’ every few seconds to a new configuration. Our reaction to the face changes accordingly between attraction and repulsion. Beauty has long established itself as a commodity that can be sold and bought. ‘A Perfect Face’ constantly tests and challenges our idea of what beauty is. We know that throughout recorded history people have been concerned with the topic of beauty, particularly female physical beauty. It can be assumed that it was already a concern before recorded history. From the ancient Egyptians through Leonardo da Vinci to Stephen Marquardt1, people have tried to quantify beauty and some have even claimed to have succeeded. However, a mathematical formula that reliably predicts whether a face is perceived as beautiful or not remains elusive. Despite the apparent impossibility of quantifying it, much research has been conducted into our perception of beauty. There seems to be a general agreement that, accounting for individual tastes and transient fashions, the perception of beauty remains constant over time and across all cultures and races. One study2 claims that averageness is considered most beautiful. Through compositing many photos, an average face emerged and this was considered by most people to be the most beautiful – deviations from this average less beautiful. Beauty is not only of intellectual and aesthetic interest. It is a commercial matter generating billions of euros every year. On the one hand, there is the desire to buy beauty in the form of beauty products, beauty therapies and plastic surgery. On the other hand, this desire is propagated, even created, through the marketing of beauty. Beauty products themselves are, of course, sold with a beautiful face. But everything from a chocolate bar to a television set is sold with the accompaniment of a beautiful face. That the owners of these beautiful faces receive high monetary rewards is only the tip of the iceberg. A study3 found that people with faces considered to be beautiful earn, on average, 13% more than those who are not so beautiful. Exactly how we perceive faces is a hotly debated subject. But all researchers can agree that we have a finely tuned ability to interpret faces involving a large amount of our mental capacity. The face is, after all, the most important means of human communication playing a major role survival and reproduction, as well as in our social skills. When presented with a new face we make instant judgments about the attractiveness, personality, mood, intelligence, health, sexuality, age of the person. These judgments are intertwined with a strong emotional response of attraction or repulsion, potential threat, potential mate, friend, enemy. Thus, when confronted with ‘A PERFECT FACE’, we are forced to re-appraise the face every few seconds and our emotional reaction changes. The use of a super-model’s face exemplifies beauty in its most superficial form where beauty is rewarded in isolation of other qualities such as intelligence, talent and personality. However the face taps into a deeper level of perception and emotion and we cannot help but interpret the whole range of human qualities into the person we seen on the screen.
1. Stephen Marquardt, Californian ‘Aesthetic Surgeon’, see wwwbeautyanalysis.com. The title of this piece is a reference to the web site’s opening phrase – ‘What is a Perfect Face’.
2. Langlois and Roggmann 1990.
3. London Guildhall University survey of 11,000 people.

Biography:
Tim Coe was born 1963 in Blackpool, England. He moved to London in 1984 to study Philosophy. After studying film making and animation he co-founded the production company Chromatose Films making music videos for the London independent music scene whilst creating artistic films and videos for events and exhibitions. In 1995 he moved to Berlin where he continues to make short films, videos and video installations. Recent exhibitions: FILE-RIO 2006, Rio de Janeiro, Brazil; FILE 2005, São Paulo, Brazil.