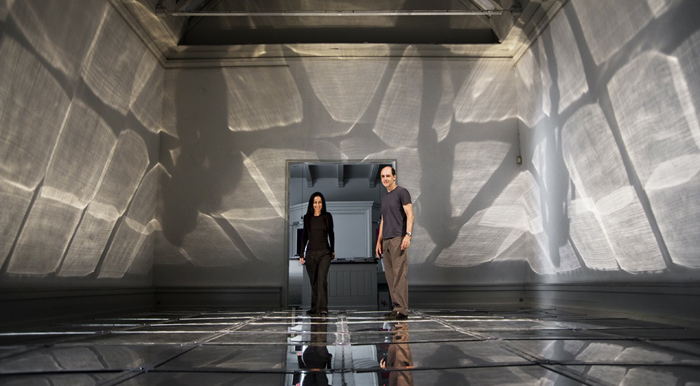 Abstract:
Imagine a flat, metallic, polished surface. Composed by 1 x 1 meter plates of nautical aluminum, each plate rests on its center and all of them are connected to each other.
Walking on this “Ground”, your body’s weight generates effects that remind that of a stone falling on a still water surface: the plates slant and, as interconnected seesaws, cause waves that propagate radially. The movement of metal against metal generates sounds, and the moving metallic surface propagates light reflexes through the environment.
“Ground” recreates in a solid form the water surface, in a counterpoint between matters. The moving metal is seen as liquid. It reacts to the presence of one or several simultaneous interactors, and reproduces a game between force and balance. Through a sequence of causalities, each plate propagates light and sound through the progressive animation of the discretized surface.

Bio:
Rejane Cantoni [www.rejanecantoni.com, www.cantoni-crescenti.com.br]
born in São Paulo, has studied communications, semiotics, visualization of information systems and cinematic interfaces, in São Paulo and in Geneva (Switzerland); since 1987, researches and develops immersive installations with devices of data acquisition and manipulation in natural and/or sensorialized environments, and automation.