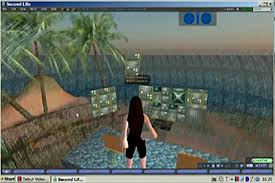 Abstract:
On the Centenary of Italian Futurism, on the 40. Anniversary of the First Lunar Landing, The First Poetry Space Shuttle Landing on Second Life. Landing of the poets: July 20-21 2009.The poets have form of spheres and colorful prisms which donate a poem file. The guest book of the shuttle “Welcome on Board” contains more then 300 poems by 230 authors from various continents, countries, and planets… Virtual installation in the framework of 53. Venice Biennale – Eventi Collaterali. June 4 – November 22 2009. A video-poetry report by Caterina Davinio with music by Mirko Lalit Egger..

Biography:
Caterina Davinio (B. Foggia, IT, 1957). Italian Multimedia artist, writer, poet. Pioneer of Italian digital art and poetry in 1990. In 1998 she was the initiator of Italian Net-poetry, a development of net-art related to multi-located events, based on line and in real spaces. Her work has been presented in more then 200 exhibitions in Europe, North America, Latin America, Asia, Australia, six times in the Venice Biennale and Collateral Events, where she collaborated also as curator. Other international biennials: Biennale of Sidney (Online Venue 2008), Athens Biennial (2007), Liverpool Biennial (Independents 2006 and 2008), Biennales de Lion (1999 and 2007), New Media Art Biennial (Merida, Yucatan/Messico, 2003), and others. Among her publications: Color color (novel, 1998), Techno-Poetry and Virtual Realities (It – Engl., essay, 2002), Fenomenologie seriali (poems collection in the review “Tellus”, Sondrio, 2003) Mirko Lalit Egger was born in Mumbai, India, and raised in Eich/LU, Switzerland. He composed his first own music at the age of 10 on the piano. Later he visited the Jazz School in Lucerne and studied Audio Engineering in Zurich. Today he is an independent musician, composer, video, and character designer. Riccardo Preziosi (B. Rome, IT, 1986) In 2005 he participated as a poet in Isola della Poesia, in 51 Venice Biennale – Eventi Collaterali. In 2009 he collaborated with Caterina Davinio as technical assistant in Second Life events, in the framework of MHO_Save the poetry, collateral event of the 53. Venice Biennale.