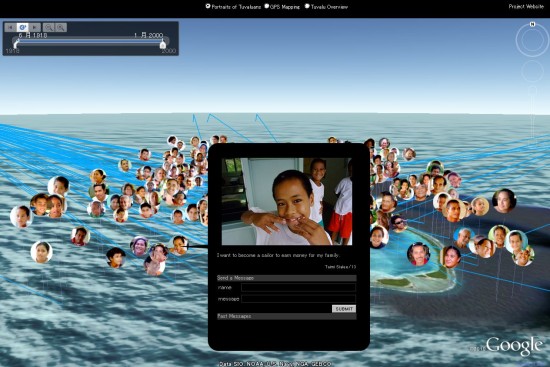 Abstract:
“Tuvalu Visualization Project”is composed of two elements : Visualization and communication system”Build the Future with 10,000Tuvaluan”for NPO Tuvalu Overview, and “Tuvalu Mapping”that is constructed of 3300 GPS photographs. The purpose of this project is disclosing actual information about”People”and”Scenery”in Tuvalu to the world. It is said that global warming is exposing Tuvalu to the sea level rising. However, we suppose that it is important to understand not only the problem of global warming, but also the real situation of Tuvalu. So, we produced this project to present the realities of”People”and”Scenery”ofTuvalu, to increase interest in Tuvalu, and to receive feedback from all over the world. “Build the Future with 10,000 Tuvaluan” by NPO Tuvalu Overview is an archiving project of portraits of people in Tuvalu. We made a visualization of this project on Google Earth, and constructed the communication system between Tuvalu and other countries. The interface that was divided into 4 altitudes hierarchies wasdesigned by using Google Earth functions. By this hierarchical interface design, users can understand the operation method and the message instinctively, without reading the explanation. This content also has a function to transmit messages. Users can write a message and send it. When a user send a message, a blue line is drawn from the user’s location toward Tuvalu. “Tuvalu Mapping” is a photograph archive representing the”Scenery”of Tuvalu. It is also complementary work with “Buildthe Future with 10,000 Tuvaluan”. We did fieldwork in Tuvalu. More than 5000 pictures of the coastline, the sky, the runway, and all roads of Tuvalu were taken. 3300 pictures of daily “Scenery” of Tuvalu were finally chosen to make the archive. Pictures were mapped on the whole area of the Funafuti atoll, and users can browse large size pictures with contents-in-ballon or 3D photo-overlays.

Biography:
Born in Oita, 1974. Researched a method of space-designing with a computer tool in graduate school of Tokyo University of Science. At the same time, worked in a game-developing team at Sony Computer Entertainment. He is CEO of Photon, Inc. from 2001. Visiting professor of Digital Hollywood University from 2005.