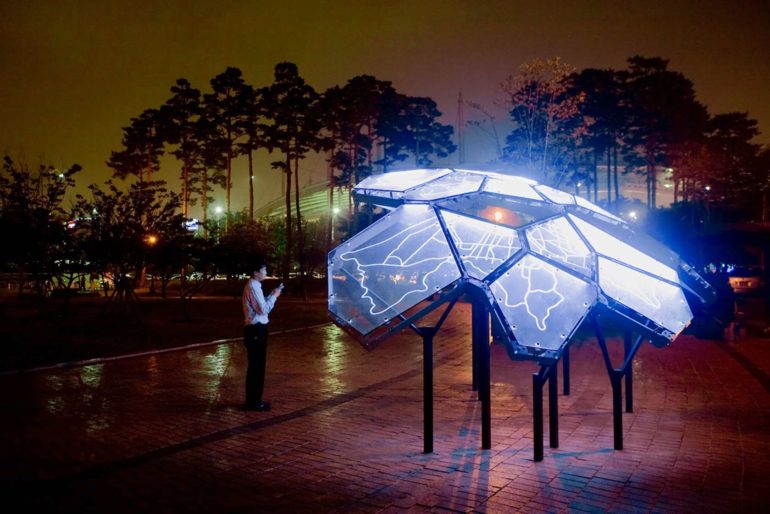 Abstract:
“Living Light” is a permanent outdoor pavilion in a public park in Seoul. It is a building envelope of the future that glows and blinks according to air quality data and public interest in the environment.
Citizens can text message the building and it will text them back, offering important real-time information about our shared resources and our collective concerns. The structure in a public park not only provides a canopy and a tactile enclosure, it also suggests that a building envelope itself can become a new kind of public space.
The envelope of the pavilion is a giant map of the city with neighborhood boundaries redrawn based on existing sensors of the Korean Ministry of Environment — each shape in this new map encloses the air closest to one of the sensors. The map illuminates to become an interactive, environmental layer of information. As people observe and interact, the envelope transforms in three ways. First, each night the neighborhoods light up if their air quality is better today than last year. Second, every 15 minutes, the map goes dark and the neighborhoods light up in order of best current air quality to
worst. Third, people can send a text message with a zip code to the Living Light Hotline, receive a reply with the neighborhood’s real-time air quality, and trigger one of the panels to blink. The unusual structural frame of the pavilion was designed by re-drawing the city map to reflect existing sensor stations, and by running a process of automated optimization. In this process, we generated and evaluated 25,000 possible designs based on two goals—best structural performance and least amount of material.

Biography:
David Benjamin and Soo-in Yang created The Living in 2004 and launched the Living Architecture Lab at Columbia University in 2005. The practice and the lab emphasize open source research and design through prototyping. Their work has been exhibited at the Chicago Museum of Science, the Innovation Lab in Copenhagen, and Eyebeam Center for Art and Technology in New York. It has received an Architect Magazine R+D Award in 2008, the New York Prize in 2007, and the Young Architects award in 2006. In 2008, “Living Light” won the Seoul City Gallery International Design Competition.