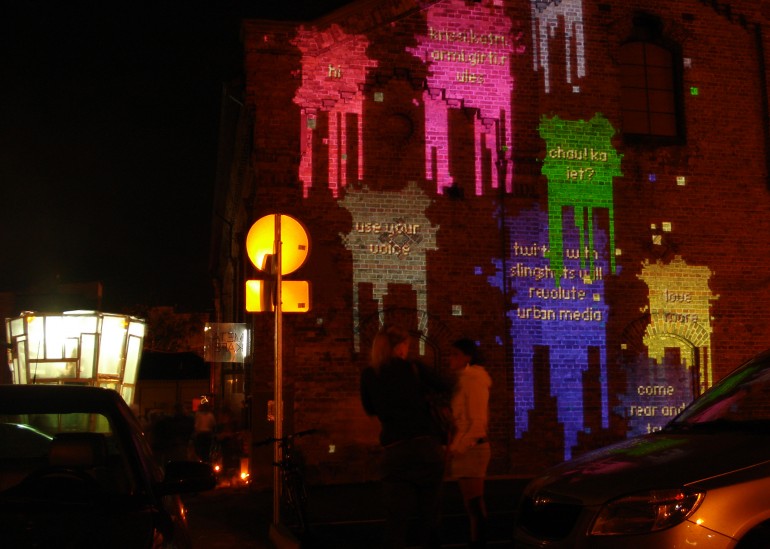 Abstract:
VR/Urban’s “SMSlingshot” is a conceptual advancement of the spread.gun intervention tool which has been created for the Mediafaçade Festival 2008 in Berlin and can be seen as an interative design revision of what we call digital intervention activism in public spaces.
By naming our first approaches as “Reclaim the Screens” we pay homage to a London based collective called “Reclaim the Streets” (RTS). Like RTS (and Lucius Burkhardt with his “Promenadologie” 20 years earlier), who often stage non-violent direct action street reclaiming events such as the “invasion” of a major road, highway or freeway to stage a party, VR/Urban seeks for ways to counter the increasing digitalization of the public, urban environment. Not by doing so randomly, but rather by crossing large scale LED media façades and digital billboards that proclaim commercial interests and “order” consumption. The increasing number of these commercial screens is matter of challenge for VR/Urban and subject of being reclaimed for public. The light polluting and intrusive form of commercial ads shown by these screens glare unwillingly the eyes of every citizen, unable to avoid the message being sent by these companies and content providers. At this point VR/Urban felt that people need accessible intervention devices to have the opportunity of reply to these massive forces of capitalism. After all it is the people’s urban space that got polluted by flickering ads.
The “SMSlingshot” is a digital intervention device equipped with an ultra high frequency radio module, hacked Arduino board, a laser and some batteries built in a wooden casing. The text messages are typed in a phone sized wooden 3×4 keypad and displayed on the built in color display. After a message is finished, it can be ‘shot’ to a targeted point on a mediafaçade just like using a common slingshot. As the message ‘hits’ the façade
a colored, pixelated splash containing the message appears. The text message will be real time twittered as well. The system is made to reclaim urban spaces and omnipresent media screens. With this device people obtain a tool, which allows them to speak up in the same “cultural-technological language” as highly developed advertising screens use: digital, fluent, complex images.

Biography:
VR/Urban is a collective of public media inventionists founded in 2008 and since then more or less working together to create public media real-time installations. The aim of all projects is to reclaim urban screen for the public. In tradition of situated art and graffiti culture, VR/Urban augments existing city structures with digital and interactive media-art. The collective strongly believes in embodiment, accessibility and the tangibility of information, so that each installation has a very performative and challenging character.
Patrick Tobias Fischer is computer scientist and researches at the University of Strathclyde in Glasgow in the field of multi modal interaction in urban environments.
Christian Zöllner works as a designer mainly focused on media interventions, design-research and design journalism. Since 2008 he is teaching “experimental design processes” at the University of the Arts in Berlin.
Thilo Hoffmann works as a software developer in Frankfurt, Germany. He is interested in immersive multi modal user interfaces and projects that lie within the field of digital and physical space.
Sebastian Piatza lives and studies in Dresden, Germany. Currently he is doing his Master studies in the fields of human powered devices for in-home use. He also performs with his DJ collective “Tanzatelier Kokü”.