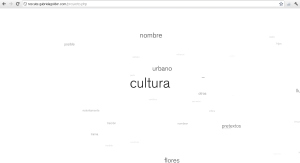 Abstract:
“Waiting for a world to be unearthed by language, someone sings the place where silence takes form. Then, he will confirm that not because it appears angry does the sea exist, nor the world. That is why every word says what it says, and more, and something else.” Alejandra Pizarnik Words are the starting point for the piece RESCATE. Words that others tried to silence, burry, burn, disappear, assassinate, exile. Words that escaped the fire, words that escaped from books that could not escape. Words become visible. Because they are pronounced, words exist, because they are pronounced, they escape oblivion. To name. Like a litany, repeating words with one sole purpose, naming them so they don’t disappear. The creation of word universes. Words become visible creating spaces. Words pronounce themselves. Bashfully, in a whisper, they pronounce themselves, so they don’t cease to exist. Each universe, each space begins with a new word. These words were rescued from books written by Argentine authors, books that were burnt during the last military dictatorship, books that were censored, books by authors that were imprisoned, disappeared, assassinated, exiled. It could have been different words, from other books, from any place in the world that endured censorship, book burning, repression, death. By choosing them, grouping them, making them visible, these words populated the space. And there they have remained, and there they will surface every time someone wishes to hear them.