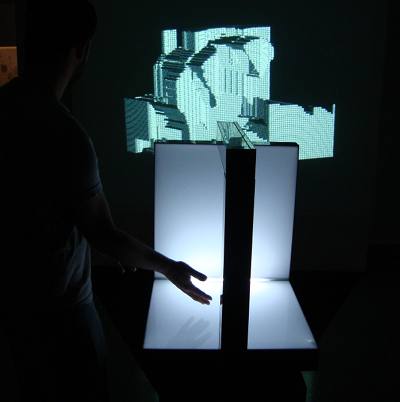 Abstract:
“Vitalino” is an installation where the visitor is invited to make digital sculptures using finger movements captured by two webcams positioned perpendicularly on a structure with controlled lighting. The sculpture is synthesized by image processing, through an intersection function of fingers silhouettes extrusions captured by each camera. It is drawn using the voxel concept, ie, pixels in three dimensions. The name of this installation is a reference to the craftsman from Pernambuco who said that in his land it was more important to learn to use hands then head. Use your hands, do not use your head, to model in voxels clay, where physical touch does not exist.

Biography:
Musician holder of a master’s degree in computer science from CIn-UFPE, researching on systems for real-time audiovisual processing. In 2009, received the Sergio Motta Art and Technology Award. In 2007, received the Itaú Cultural Arte-Cibernética Award because of master’s degree about free software ViMus. Exhibited at FILE-RIO 2009, FILE-SP 2008, Arte.Mov 2009, Coquetel Molotov 2009, On_Off 2009 and Emoção Art.ficial 4.0. Have been guitar player of bands Negroove and re:combo.