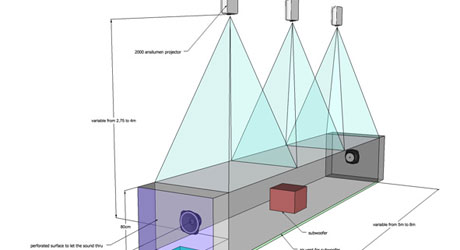 Abstract:
Waves is an audiovisual installation which invites its audience to explore the nature of soundwaves in a playful manner. The aim of the installation is to create a tangible and visual interface which offers an in-depth yet accesible understanding of the fundamental principles of sound synthesis. An interactive table with two multitouch surfaces on the outermost sides, functions as a platform for participants to make connections with each another. Whenever participants touch the surface, a new connection is realised and a wave is drawn between the participants. Much like a musical instrument, the behaviour of this wave can be modulated by the physical expression of its players. However, in Waves there’s a much stronger emphasis on visual stimuli. The synthesis of electronic sounds is often thought of as an abstract and intellectual process. The modulation of elemental properties of waveforms – such as frequency, harmonics and interference – can quickly result into complex phenomena which are best understood by scientific analysis. Waves strives to make these processes more insightfull and self-explanatory through interactive visualisation. For example, in the action of throwing a pebble in a pond, visual experience enables an understanding of ‘what is going on’ in a way which is rather intuitive. This proces of intuitive understanding forms the key principle of our interaction model: Waves surpasses technical and rational explanation of wave-phenomena, by focusing on its audiovisual experience.

Biography:
Hugues Bruyère is a hybrid designer, programmer and creative technologist, Hugues Bruyère studied Electronics and Computing in France, and completed a Bachelor of Fine Arts in Computation Arts at Concordia University, in Montréal, Canada. Methodical and playful, Hugues’ explorations into art and technology are pushing him to create media art projects about human-computer-human interactions. He has worked as a research assistant for various research labs at Hexagram Institute for Research/Creation in Media Arts and Technologies. His project/research, Performative Surface: double sided interaction, has been presented at ACM 2007, Dorkbot-Montréal, FILE RIO 2009 and FILE 10 NURBS PROTO 4KT. He also collaborated on AirXY, a project shown at the Venice Biennale. Hugues currently works independently from Montreal.

Daan Brinkmann (born in 1983) is a media artist from the Netherlands. His main preoccupation is creating installation art. His installations are either autonomous or interactional. His interactional works are always based on the expressive potential of the spectator’s body. Rather than the empirical elements within such a work being the artwork itself, they are often used as a means to achieve a new kind of social experience. His autonomous installations counterbalance this approach. They strive to be in-depth explorations where the perception of light, sound, space and time becomes subject to itself. In 2006 his work won the René Coelho Award at the Dutch Institute for Media Arts.