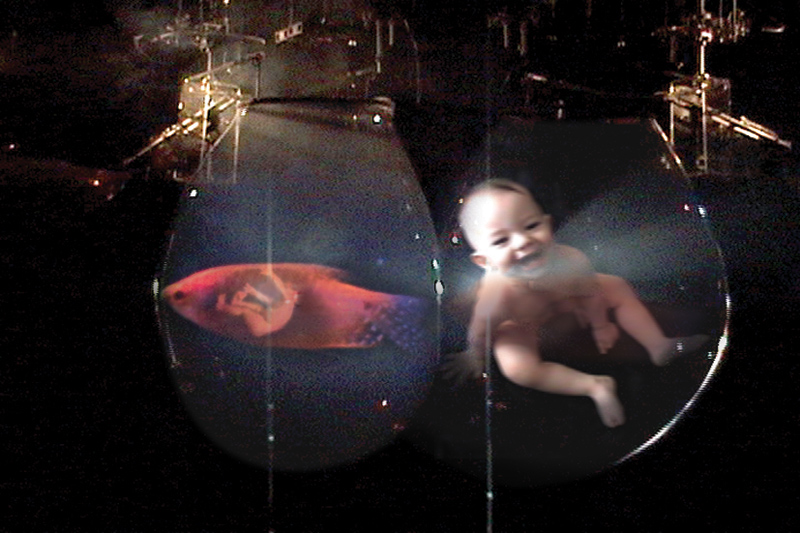 You Came With the Breeze 3.0

Abstract:
“It’s possible that there, where I failed, someone else might succeed”. Frankenstein Inside a “Genetics Laboratory”, amidst the spectator’s presence, two machines generate industrial wombs, inside of which living, moving beings struggle for life. The bubbles intertwine, allowing both gestating life forms to meld into one. At this point, a new transgenic being, a hybrid-dream-phenomenon-monster emerges. “You came with the breeze – 3.0” is an investigative project, inspired in imaginary genetics. The lab is no longer a metaphoric state; it is a reality. Elements such as water, soap, humidity, superficial density, evaporation, and basic fluid physics, allow the production of large bubbles resembling an industrial womb, where images are projected, creating a borderline place where virtual reality side sweeps life and, where the illusion of creating something organic from the inorganic, arises. Two machines comprise the main elements of the installation “YOU CAME WITH THE BREEZE – 3.0”. Each one of them, alongside an autonomous robot, is capable of constantly creating bubbles measuring two meters in diameter. As the bubbles receive steam injections, they turn into screens capable of reflecting images from a projector. The moving images emerge and new live beings can be seen within each one of the bubbles.

Biography:
Filmmaker/artist. Studies Filmmaking at EICTV, Cuba, created by García Marquez, 1986-90. Directs shortfilm “Street 22” – 1992; 22 international awards. Her first feature, “At Midnight And A Half”, (1999) participated in 40 international festivals, receiving several Opera Prima Awards. Her second feature, “Postcards From Leningrad” (2007), won 27 international awards, such as Grand Prix Biarritz; Mostra International de Sao Paulo; Best Direction & Fipreci, Kerala, India. In fine arts, her installation “And I Who Loved Her So” received Special Mention – IV Salón Pirelli, Caracas, 2000. Her next installation, “Came With The Breeze 1.5”, was shown around the world. “Came With The Breeze 2.0” received the Production Award at Fundación Telefónica Vida Artificial 8.0, Spain 2006, and has been presented at Synthetic Times- A Beijing Olympics Cultural Project- National Art Museum of China 2008. “Came With The Breeze 3.0”, her latest work recently finished (2009), has not been shown yet.