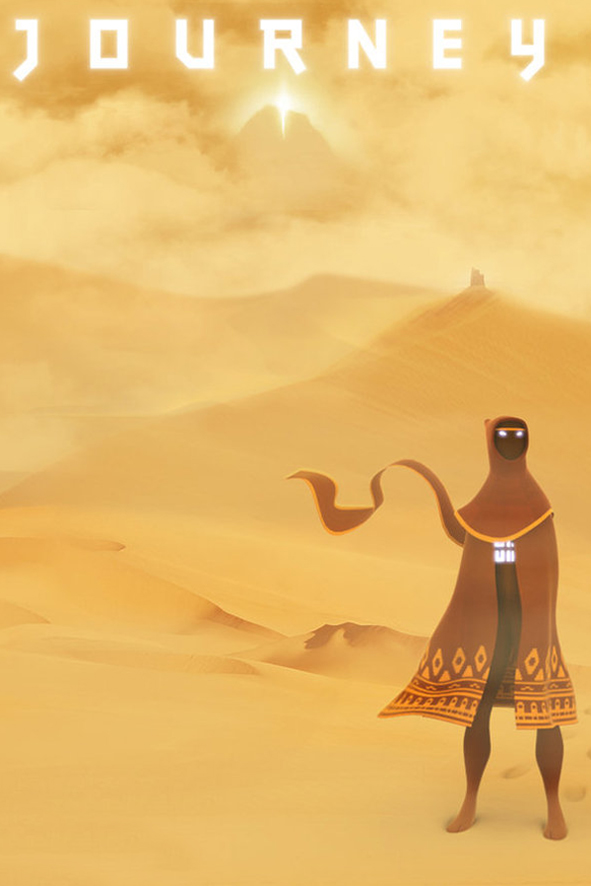 Abstract:
“Journey” is an interactive parable, an anonymous online adventure to experience a person’s life passage and their intersections with other’s. You wake alone and surrounded by miles of burning, sprawling desert, and soon discover the looming mountaintop which is your goal. Faced with rolling sand dunes, age-old ruins, caves and howling winds, your passage will not be an easy one. The goal is to get to the mountaintop, but the experience is discovering who you are, what this place is, and what is your purpose.
By creating “Journey”, the developers sought to build an experience that evoked sensations of smallness and fascination before the world portrayed and that forged an emotional connection between them and the other anonymous users found during the journey. The song, composed by Austin Wintory, responds dynamically to the player’s actions and is built on a single theme, which represents the emotional arc that is developed during the narrative. The game was acclaimed by specialized critics, especially for its audiovisual art and the feeling of companionship created by playing with a stranger. Critics have defined production as a “touching emotional experience”.
“Journey” won several “Game of the Year” awards and received many other honors, homages and nominations, including the Grammy Award’s “Best Score Soundtrack to Visual Media”, the first time in the history of the Awards that an electronic game was nominated in this category. A “Collector’s Edition” containing the previous thatgamecompany titles and additional content was released on August 28, 2012.

Biography:
Jenova a.k.a. Xinghan Chen is the visionary designer of the award-winning games Cloud, flOw, Flower, and most recently Journey. After earning a bachelor’s degree for computer science in his hometown of Shanghai, Chen moved to Los Angeles, where he got a master’s degree in the founding class of University of Southern California’s Interactive Media and Games Division. Following school, he founded thatgamecompany with fellow graduates, where he remains its Founder and Creative Director.