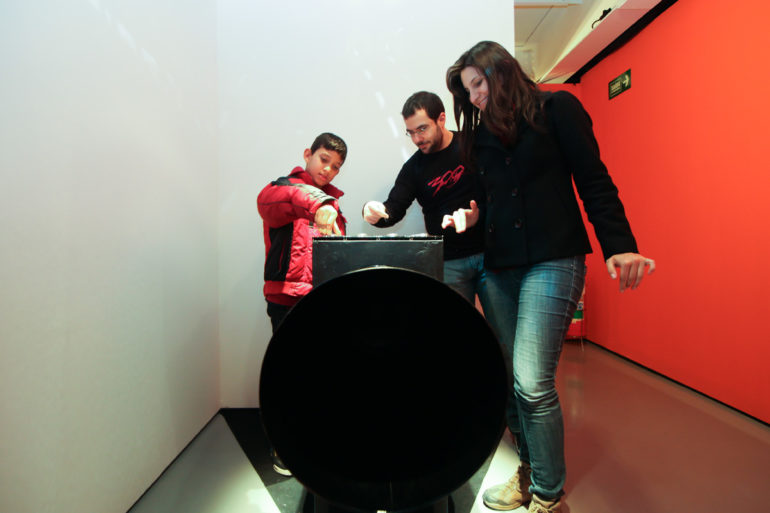 Abstract:
“Motor-HD Phone” is an interactive sound installation that combines HD (Hard-Disk) technology with the use of the frequency generated by the motor which makes the rotating movement of the magnetic disc, turning it into a sound wave generator.
The result of this movement generates an audio-signal ranging from 15 to 120 Hz at the level of 110-120 decibels (sound pressure). By connecting the two poles (+ / -) of the electric motor to an audio cable P10, it is possible to hear low frequencies known as bass, in accordance with the changes in speed (rotating movement of the motor).
The electric motor is a technology that turns electric power into mechanical energy, which was devised by several scientists and had its latest version in 1886, thanks to German Werner Von Siemens. HD, the abbreviation of Hard-Disk, has the purpose of storing data by means of the magnetic recording system.
Both united have the basic purpose of storing data, a technology created by IBM in 1956. The secondary purpose, which has nothing to do with this function, was inspired by Gambiology and Luigi Russolo’s work (Intonarumori).
If we connect the electric motor with HD, we can work in the material field and creative reflection aiming for new works and technological critics. Thus, “Motor-HD Phone” was conceived to flow new art forms by investigating tons of electronic waste that we produce everyday.

Biography:
From the capital of the State of São Paulo, Eric Marke graduated in advertising and journalism and is a teacher with MD in communication. He is also a DJ since 1984 (Madame Satã, Espaço Retrô, Playboy Disco Club, and Trumptown) and an electronic musician since 1987. Since 2003 he participates in the organization and curatorship of FILE – Electronic Language International Festival. As a journalist, he is an international correspondent for the BBC-News Channel. He entered the arts scene in 1979 as a filmmaker while he was a boy, and became a researcher, historian and performer in later years.