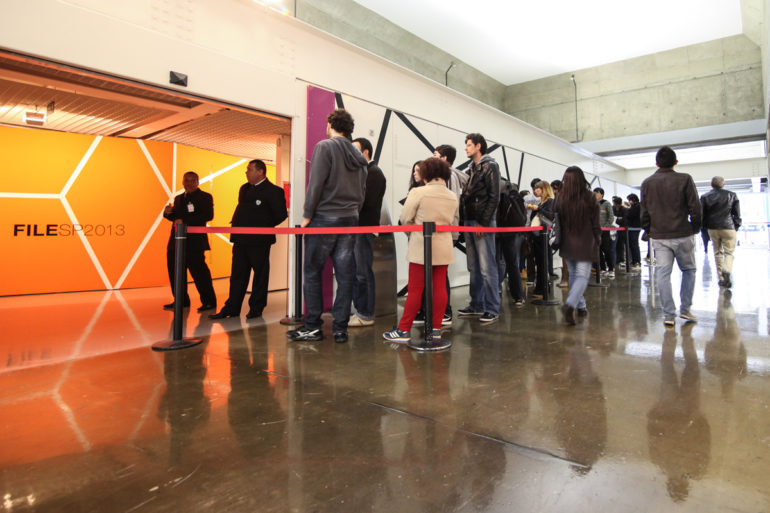 From July 23 through September 1st, SESI-SP presents the 14th edition of FILE – Electronic Language International Festival, the main event of digital art in Brazil. The programme, which is free for all ages, will take place in four spaces at Centro Cultural FIESP – Ruth Cardoso, on Paulista Avenue: the Art Gallery, the SESI-SP Digital Art Gallery (facade of the FIESP/SESI-SP Building), the FIESP Space I, and the Mezzanine Floor, in addition to the Trianon-Masp subway station.
In the current edition FILE presents the FILE LED SHOW, with interactive images on the LED panel at the SESI-SP Digital Art Gallery (facade of the FIESP/SESI-SP Building), as well as animations, interactive installations, apps for tablets, games, machinimas, performances, workshops, round-table discussions, and meetings with international artists.
In gathering art and different electronic media, the works will introduce creative productions with visual and sound languages for the public. The festival is divided into the following clusters: FILE Interactive Installations, FILE LED SHOW, FILE Games, FILE Machinima, FILE Anima+, FILE Tablet, FILE Media Art, FILE Subway, FILE Hypersonica, and FILE Symposium and Workshop.

Jacob Tonski – Balance From Within – Estados Unidos
The sofa balances through a robotic mechanism which releases a periodic low moan which is milder than speech.

FILE LED SHOW
Change the panel with your voice
For the first time FILE presents the FILE LED SHOW, a new interactive work by famous French group 1024 architecture, formed by artists Pierre Schneider & François Wunshel, on the huge LED panel on the facade of the FIESP/SESI-SP. People could change the images on the panel through their voice or by singing a song.

Highlight FILE Anima+
Anrick Bregman & Koji Morimoto – Attraction (interactive animation) – França, Japão & Brasil
“Attraction” is the world’s first interactive anime which was commissioned as part of an anti-smoking campaign for youths and directed by Koji Morimoto and Anrick Bregman.
It tells the story of Hiro, Koichi, and Ren, three teenagers who live in Tokyo in the year of 2050, and come to realize that growing up is not so funny as they expected.

FILE Games
FILE Games 2013 brings amazing games from indie studios, productions by leading developers, and installations from several countries to the most important artistic-cultural event devoted to art and technology in Latin America. Although diverse, the games selected are all related to arts, whether by means of technological innovations, graphs, or playability. Among the current selection of games, one highlight is the minimalist “140”, by Jeppe Carlsen, and the lovely “Machinarium”, by Amanita Design Studio.
Highlights FILE Games
Jeppe Carlsen – 140 – Dinamarca | Denmark
Developed by the game designer responsible for Limbo, “140” is a challenging, minimalist game comprised of platforms with colorful abstract graphs. The obstacles controlled by an energetic, melancholic electronic soundtrack can only be overcome with rhythmic conscience, which is a fundamental element in its playability.
Amanita Design s.r.o. – Machinarium – República Checa | Czech Republic
“Machinarium” is an action game about a little robot that was expelled to a junk yard behind its city and must go back to face the Black Cap Brotherhood and save its robot-girlfriend. With beautiful graphs, various puzzles, and mini-games, you are led to explore the legendary rusty city of “Machinarium”, while its soundtrack deeply involves you.

FILE Subway
The user is also the author
The interactive installation “Corpo Digitalizado”, by Brazilian artist Juliana Cerqueira, will be presented at Trianon-Masp subway station.
In this installation the visitor could digitize his/her body in different positions and see it through TV monitors.

FILE Symposium
FILE Symposium is a forum to discuss electronic digital culture in terms of its international relations and promote the dialogue on digital culture in its transdisciplinary aspect. FILE Symposium Will have round-table discussions with the participation of Brazilian and foreign artists, theorists, and researchers into the art-technology field. The Symposium is also an opportunity to see presentations by artists, such as American Jacob Tonski, who are exhibiting works at the SESI Art Gallery.
The number of participants is limited and free applications can be made on the website http://www.file.org.br.

Full programme and free applications for the Symposium and Workshop on the website www.file.org.br