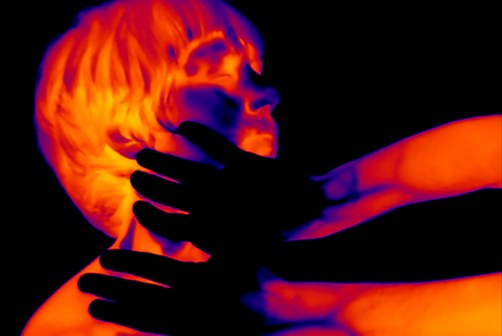 Abstract:
In each video we see a person’s face captured with a thermal camera. The changes in the skin temperature happen by means of the other’s touch, which is noticeable by drawing with cold or heat on the partner’s body.

Biography:
Gisela Motta and Leandro Lima were born in 1976 in São Paulo, Brazil. They have studied Visual Arts at FAAP in São Paulo, and since this period they have been working together. From 1998 on they have joined several group exhibitions in Brazil and abroad like: 1ª Bienal Fin del Mundo, Ushuaia, Argentina; 10ª Bienal de Havana – Integração e Resistência na Era Global, Cuba; Höhenrausch.2, OK_Centrum, Linz, Austria; and Supertemporal – International Videoart Today, Kulturhuset Museum, Stockholm, Sweden. In 2012 they presented the solo show “Anti-Horário” at Galeria Vermelho in São Paulo, as well as “Sopro” at CCBB in Rio de Janeiro. In 2007 they were selected for a 3-month residency promoted by UNESCO – Aschberg Bursaries for Artist at Hiap, Helsinki, Finland. In 2008 they went to England for the Artist Links Residency – England/Brazil, from British Council. Still in 2008 they were selected for a residency at Mamam at Pátio, in Recife, Brazil, which took place in 2011. The artist duo have been granted the 2nd Prize Marcantonio Vilaça, SESI CNI, the 13th Prize Cultura Inglesa Festival, the 8th Prize Sergio Motta de Arte e Tecnologia, and the CIFO 2010 – Cisneros Fontanals Art Foundation, Miami, EUA. In 2012 they were on the shortlist for the Nam June Paik Award.